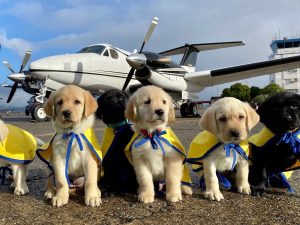 The planes were safely transporting golden retrievers, Labrador retrievers, and mixed puppies to their new, temporary homes. It was each puppies’ first step in becoming an assistance dog.

The pilots were helping Canine Companions for Independence, a nonprofit that provides trained assistance dogs to people with disabilities free of charge.

With the help of the volunteer pilots, the nonprofit has brought 108 puppies to southern California, Idaho, Oregon, Washington, Montana, and Texas. The nonprofit connected with Martyn Lewis, Josh Hochberg, and Jeff Stewart, three private pilots who fly out of a nearby airport in Sonoma, California.

“Not only are they giving their plane, but their time, their fuel,” Michelle Williams, the public relations and marketing coordinator at Canine Companions, told Insider. “They’re going out for full days … it’s just incredible.”

Hochberg, the owner of Sonoma Jet Center where the planes fly out of, had never flown with puppies before.

“Once they get into the plane, they require less attention than my daughters,” he told Insider.

His two daughters will often ride along during the puppy flights. They play with the puppies an hour before takeoff, which wears them out. Once they’re on the plane, the puppies usually sleep the entire ride, Hochberg explained.

He said this work has created some positivity for his family in these challenging times.

Hochberg’s family added a new member, Charlie, an American Brittany, which he fully attributes to his work with Canine Companions.

The biggest challenge now is finding volunteer pilots with planes that have the capacity to travel farther east.

“We’ve got the West Coast covered,” Hochberg said. “The challenge is the dogs need to go all the way across the US.”

The dogs are bred at Canine Companion’s headquarters in Santa Rosa, California. At the nonprofit’s breeding center, golden retrievers, Labrador retrievers, and mixes of the two are bred for traits like calm temperament.

The 8-week-old puppies are then placed in temporary homes where families and individuals will raise the dogs. The volunteers will socialize the dogs and teach them about 30 commands. Once the dogs are about a year and a half, they’ll be placed in professional training centers, where they’ll learn more advanced commands.

Canine Companions currently has 400 people on its waiting list for a service dog. “If we were to put everything on hold, those people are going to wait longer for their assistance dogs,” she explained.

Luckily, the work hasn’t paused, and now the puppies can begin their road to becoming a service dog.