George Bush’s Staff Gets Memo About His Dog 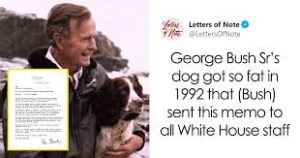 One of the best things about our past presidents is that they had dogs. Barack and Michelle Obama seemed to really dig Portuguese water dogs, and had two.

First was Bo, who started hanging out in the White House back in 2009. Sunny followed, joining in 2012.

Former U.S. President George W. Bush and former First Lady Laura Bush were the parents of Barney, a Scottish Terrier that sadly passed away at the age of 13 in 2013. Bill Clinton and Hillary had a dog named Buddy, who was a chocolate-colored Labrador Retriever. Oddly enough, Buddy might not have been quite as popular as Socks, their pet cat. Then, there were the many dogs owned by George H.W. Bush.

He was truly a dog fan, and had pups around him throughout most of his life. Mildred “Millie” Kerr Bush was the Springer Spaniel who was owned by George and his Barbara. His wife Barbara. Sully H. W. Bush is still living, and was the service dog who was by George’s side at the time of his death.

And, then there was Ranger. Ranger was Millie’s son, and sources say that the pup quickly stole George’s heart. But since Millie got most of the attention, not as many people focused on him. When it came to Ranger, President Bush had a unique sense of humor. He knew that Millie was the more popularly known dog, and that many might not be able to tell the two Springer Spaniels apart at first glance. Presidential Pet Museum reported that once, at a 1990 press conference, George poked fun at the common error. “The other day our dog Ranger appeared at a press conference, and he was called Millie [by reporters],” he said. “He’s a strong male dog here, as you can see, and his feelings were slightly hurt.” Ranger was named after the Texas Rangers, and had an immediate bond. In fact, there’s an interesting tidbit of information that Barbara divulged about their relationship.She actually said that George and Ranger often showered together once per day. Ranger made his way into the White House just to be able to have more room to play and roam, and it seems like George had no problem with this arrangement whatsoever. Barbara was also a fan. “He could leap straight up into the air and his handsome face made us laugh,” she said. “He loved to curl up by George’s side and was everything in a dog George wanted.” Ranger also happened to love human food. Who doesn’t? But it became such a big problem that George actually had to write a memo to his staff about it. In 2019, the memo went viral after being shared by Adam Bates for International Dog Day. As the holiday just passed again, it’s getting extra traction. The subject of the memo was called “My Dog ‘Ranger’” and — while it’s never okay to fatshame a dog — you can instantly tell that George wrote the memo with nothing but love. “All offices should take a formal ‘pledge’ that reads as follows: ‘WE AGREE NOT TO FEED RANGER. WE WILL NOT GIVE HIM BISCUITS. WE WILL NOT GIVE HIM FOOD OF ANY KIND,’” the memo reads. It mentioned that Ranger was on a brand new diet to conquer his weight issues.

“I will, of course, report on Ranger’s fight against obesity,” George added near the end. “Right now he looks like a blimp, a nice friendly appealing blimp, but a blimp.” Ranger also had some of his roaming privileges taken away. After the memo, he was officially no longer allowed to walk around the corridor without an escort present. Unfortunately, Ranger didn’t have a long life ahead of him. He passed away at the young age of 4 after having fought cancer. George H.W. Bush admitted that Ranger’s passing was very upsetting. “I cried for two days,” he said, per The Hill. “I cried because I loved him and knew I’d miss him; for he had made me the happiest dog owner in the whole world. I know that when you are an old guy, you aren’t supposed to cry, but I did.” Ranger is a reminder of the happiness a dog can bring you. There’s a reason why so many dogs have been adopted or fostered this year — they’re often the one bright spot to a dark day. According to Vox traffic to the popular pet adoption site PetFinder increased by 43 percent once people started staying home. Luckily. George had Sully to be by his side during his last few years, According to the Houston Chronicle, Sully was chosen to be a member of the household shortly after Barbara passed away. At the time, George was dealing with Parkinson’s Disease — so, Sully was a nice companion. So, why did Millie often get the most credit? Millie was by far the most visible dog in Bush’s White House. She was also the author of her own book. “So beloved was Millie, that in 1990 Barbara Bush published a children’s book, Millie’s Book: As Dictated to Barbara Bush, crediting the spaniel with the text that benefitted nonprofit literacy organizations, the first lady’s main cause. That book, “written by” Millie, reached the top of The New York Times Best Seller list,” writes The Chronicle. Millie was with the family for 12 years before passing away from pneumonia. At the very least, she’ll always have her book. That said, it’s interesting how presidential pups often gain their own fanbase. And, that’s not only true to the United States. Everyone knows that Queen Elizabeth has a fascination with corgis. Rumor has it that the Queen, who’s 94, has owned approximately 30 Pembroke Welsh corgis in her lifetime. Right now, she reportedly has two “dorgis,” which are corgi and dachshund mixes. Their names are Vulcan and Candy, and they reportedly eat standard dog food — just in case you thought the Queen had any sort of particular diet plan for them.According to Express, the Queen’s last remaining full corgi passed away in 2018. The dog, named Willow, was reportedly put down at the age of 15 due to cancer. She was the 14th generation of Queen Elizabeth’s very first corgi, whom she named Susan. Much like the presidents, the Queen’s choice in dog breed made them quite popular among dog lovers. But much like George H.W. Bush, the Queen surely had a special place in her heart for each pup. Ranger will always be in our memories as long as George’s memo keeps circulating.