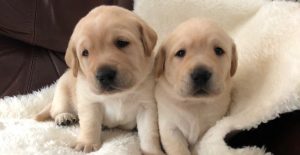 Two adorable Labrador puppies have been named Bonnie and Henry in a tribute to BC’s provincial health officer.

BC & Alberta Guide Dogs said staff chose the names because Dr. Bonnie Henry embodies qualities they think the dogs should have.

“Dr. Henry has been a wonderful presence of calm and guidance through the COVID-19 pandemic, and our organization felt that it was a fitting tribute to name these little puppies after her, as they will one day grow up to provide those same qualities of guidance and support to someone in need,” Bill Thornton, CEO of BC & Alberta Guide Dogs, said in a news release. Dr. Bonnie Henry said she was touched by the gesture. Bonnie and Henry were born into a litter of 10 puppies. All the siblings will train to be certified as guide dogs, so that when they grow up they can help people who are blind or who have visual impairments. Some of the puppies may also go on to become service dogs for people with autism or PTSD service dogs for veterans and first responders.