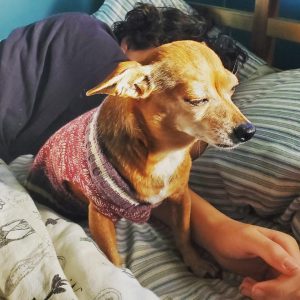 A Richmond-based animal charity is appealing to the community to help fund a life-saving pacemaker for a rescue dog.

The Regional Animal Protection Society (RAPS) said Rhoda, a seven-year-old Chihuahua-mix, has an extremely low heartbeat and requires a pacemaker to save her life.

RAPS’ appeal follows the charity’s offer on Giving Tuesday to provide 100 per cent subsidies for care at its animal hospital to four pets whose families are affected by hardships due to COVID-19.

One of those four was Rhoda, who now requires the attention of a cardiac specialist and, of course, the pacemaker, which is estimated at $10,000.

“A number of inspiring stories came in and we are helping four families,” said Eyal Lichtmann, RAPS’ CEO.

“Rhoda’s story is especially moving. She came to us for a general checkup and doctors discovered an alarmingly slow heart rate.”

While RAPS is covering the costs for the animals chosen for the holiday assistance program, Rhoda’s case requires out-of-hospital, specialist care.

Robyn and Keith Wilson and their son, Leo, adopted Rhoda four years ago from a local rescue, two days after the family had lost their dog.

Rhoda was also suffering a loss, having given birth to a litter of six puppies, three of whom died.

“She was very healing for us in that period of grief,” said Robyn.

“Then she quickly became my son’s little sidekick.”

Leo, who was 10 at the time, experiences anxiety and Rhoda became an instant (unofficial) service dog to him.

“I think it’s just her funny, obsessive, mothering nature,” added Robyn. “She left her puppies and she took on my son. She’s always with him. She means everything to us.”

The family has experienced hardships due to the pandemic – but a vet bill of thousands of dollars would upset any family’s budget.