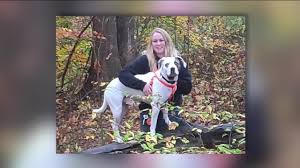 The family of a dog that went missing after a crash in Akron is still searching for the pup.

The dog, named Frank, was in the car with his owner, Ashley Frickey, when the vehicle was involved in a rollover crash on Broadway Street and Rosa Parks Drive on Dec. 16.

Police said the driver of a box truck tried to make a left turn on a one-way street and crashed into the vehicle Frickey was driving The driver of the truck was cited, according to officers.

Frank was ejected from the vehicle, took off, and hasn’t been seen since. He was last seen running north on the towpath trail behind Spaghetti Warehouse.

Frickey, who rescued the dog last year, cried during an interview with News 5, explaining that she trained Frank as a therapy dog to help her cope with anxiety and depression.

“I’m lost without him. I feel like half of my heart is gone,” Frickey said.

Frickey, 19, said Frank is chipped and also has tags with her number on it.

The owner is now offering a reward to anyone who finds or returns the dog.

“It’s going to be no questions asked. We want him home. He’s part of our family.”

The owner said he responds to “Frank” and loves loud cars and trucks. She isn’t sure if he’ll come when called, however, because he may be frightened from the crash.

Frank is white with a big brown patch on the left side of his face and a smaller brown patch around his right eye. He has light blue eyes and was wearing a blue “Subaru” collar dragging a leash when he went missing.

Due to the fact that he may be scared, Frank’s owner asks that if he is spotted that he is not chased because he will run.