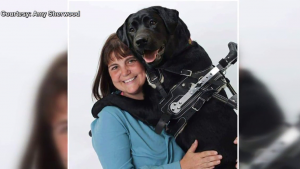 A service dog from Naples could soon be a canine superstar.

Dolly Pawton has made the semifinals in the American Humane Hero Dog Awards.

The black Labrador Retriever is a service dog for Amy Sherwood, a Maine resident with several illnesses. Dolly alerts Amy if her blood pressure drops too low or if her heart rate rises to an unsafe level.

If Sherwood passed out at home, Dolly is even trained to press a certain button that calls 911.

“Dolly has been amazing with filling any needs that I have, including emotional needs” says Sherwood, “She was more of a cardiac alert but she’s helped me with everything from picking up items, to PTSD, to helping me navigate through the store safely.”