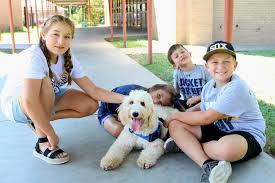 tudents at Hook Elementary will now have a little furry friend to help them with stress and anxiety – thanks to Jack, and Anything’s Paws-ible.

Kristin Cashon began forming the non-profit organization over a year ago.

“I have on many levels and times in my life been affected by mental health, and now one of my children has mental health issues,” she explained. “My daughter was diagnosed with OCD and she is possibly early bipolar disorder. Through the process of getting her treatment and diagnosed, we were exposed to a therapy dog program at Cook Children’s and it made such an impact on her.”

Cashon saw how much the program helped her daughter and made it her goal to bring it to Stephenville ISD.

She approached SISD Superintendent Matt Underwood with the idea and handled the purchasing of the dogs and the training. Soon, the program was underway.

Now, Anything’s Paws-ible has a new therapy dog, a Schnoodle – schnauzer poodle – named Jack. He came from a family in Alabama who breeds and trains animals. Jack is hypoallergenic and doesn’t shed.

Jack will help students at Hook cope with testing and reading anxiety.

“Kids benefit from it whether they realize they do or not,” Cahson said. “One of the things that we target Hook for is they’re learning to read, so the ones who might have a speech impediment or even ESL, they can read aloud to the dog and the dog isn’t going to judge them for how they sound. They never have to feel under the microscope, so we thought reading to them in the library would be a good tool for them to get those readers to the next level.”

Jack will be in the library at Hook one day a week, until he gets comfortable, but will eventually be there every day.

Cashon said Jack will also be available to other schools in the district as needed.

“If they’re having problems with a student or if we have a crisis that happens at one of our schools, that is his first priority to just sit with that student, but the days he’s not doing that, he will be at Hook,” she said.

Cashon said the timing was perfect, with introducing Jack to students after a five-month break from school and the uncertainty surrounding the coronavirus.

“It makes me emotional because I knew it would be important, but it’s really important to them and kind of gives them a reason to look forward to going to school again. They’re all worried about these masks and all these new procedures. It’s something kind of common that they can just enjoy…that part’s really special,” she said.

She said the organization’s long-term plan is to have a dog at every campus.

“We are going to work towards getting our second dog in the coming months since it takes about a year once we decide to do that,” Cashon said. “That’s the most important thing right now is to let everyone know that the program is still growing.”