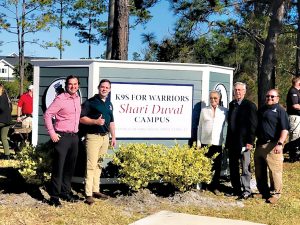 K9s For Warriors, a nonprofit organization that provides military veterans suffering from severe PTSD, traumatic brain injury and military sexual trauma with service animals, recently changed the name of its main campus to honor its leader and founder Shari Duval.

Duval began K9s For Warriors in 2011 after her son returned from two tours in Iraq with intense PTSD. Duval wanted to create a way to help her son, and help other military veterans like him, in the easiest way possible. After researching canine assistance for PTSD survivors, K9s For Warriors was born.

The nonprofit quickly became the nation’s largest provider of service dogs to veterans, rescuing thousands of dogs over the last 10 years and providing over 650 graduates with capable service animals. The program is run by a board of directors and dozens of volunteers who train and prepare the dogs to assist veterans with disorders.

The three-week long program takes place on the main campus where veterans learn how to re-enter civilian life, and leave with a service animal once they graduate the program. It is at no cost to the veterans, as the organization’s main goal is to help the veteran and their dog bond and heal together.

“Shari is leaving a legacy for generations to come by creating K9s For Warriors,” said Brianna Bentov, public relations manager for the organization. “It only seemed appropriate to at least rename the national headquarters after her.”

Volunteers, staff and multiple board members made an appearance at the renaming ceremony. Judge Ron Swanson, a board member, gave a moving speech about the importance of Duval’s work, and Duval herself also took a moment to speak about her plans for the organization’s future.

Affectionately dubbed “Mom” by warriors at the organization, Duval has made a lasting impact on thousands of lives in creating K9s For Warriors.

“Our men and women of our military fought for our tomorrows,” Duval said, “so we fight for theirs.”