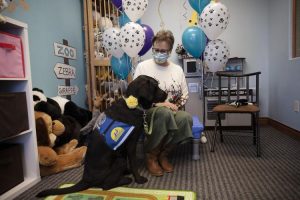 Rachael has a deep, resonating bark that occasionally comes out while playing rough and tumble with her canine friends. That is when the blue vest is off.

When the vest is on, Rachael speaks with her brown eyes, calmly sizing up the people around her.

The 2-year-old Labrador retriever is a facility dog, getting ready for what will be a serious job come Jan. 1 with offices at both the Center for Children and in the 21st Judicial District Attorney’s office in the Mesa County Justice Center.

Rachael’s calming presence will be with young child abuse victims during forensic interviews and mental health therapy sessions. She even will be in the witness box, reassuringly within petting distance of a child as he or she testifies in court.

When prosecution of a child abuse or child sexual abuse case depends on a child being able to verbalize what happened, to overcome nervousness and convince 12 adult strangers in a jury that something unthinkable really did happen, that is when Rachael’s calming presence will be key, said Dan Rubinstein, Mesa County district attorney. The dog’s presence also can be an integral part of healing for survivors, he said.

“I’ve seen children curled up, afraid to talk,” said Joan Mulleady, the clinical program director and therapist with the Center for Children, which works to provide healing and justice for abused children.

When a dog like Rachael enters the room, “children just physically relax,” she said. Some children may not want to touch the dog just yet, and others pet the dog and play with its ears.

“This dog, if she’s anything close to Tilly, she’s amazing,” Mulleady said. Tilly, also a Labrador retriever, served Mesa County children as a facility dog for three years until her retirement in July of 2019.

Her ability to develop relationships with children was missed, and Rubinstein’s office has been working to get another facility dog.

Rachael was donated to Mesa County by Canine Companions for Independence, a California nonprofit that breeds and trains dogs to become service or hearing dogs, to serve veterans with disabilities or to assist in professional settings including in criminal justice and education.

At 8-weeks-old, Rachael was placed with an inmate at the Naval Consolidated Brig, Miramar, which has a puppy raising program, said Ashley Edstrom, Rachael’s handler and an employee with the district attorney’s office.

For 18-months the inmate gave Rachael her basic training — how to sit, stay and so on, Edstrom said — and then Rachael received her professional training at Canine Companions’ campus in Oceanside, California.

“She can hold a command for hours,” Edstrom said. That said, Rachael loves people, especially kids, and prefers to be touching someone at all times, she said.

If someone scratches Rachael’s side, which she likes, she kind curls up and “lima beans” her body, Edstrom said. A co-worker noticed it and nicknamed Rachael “lima bean,” and it has stuck. Jelly bean is another fond nickname.

“I think when we get going with this, she’s going to be in high demand,” said Edstrom, who will be managing Rachael’s time.

Currently, Rachael is meeting staff and adjusting to her new surroundings at the Justice Center and Center for Children.

But in January, Rachael will be on the job, likely meeting the children who need her in the lobby of the Center for Children, going with them to forensic interviews or to therapy sessions, even if it means Edstrom will have to wait outside the room.

Rachael is there “to make sure the child heals,” Mulleady said. “This is for the children.”