Lil Bub And Beyond 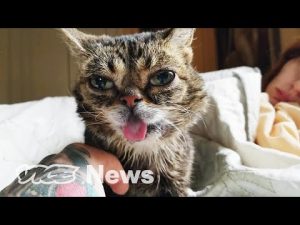 Three weeks after Lil Bub died, her owner, Mike Bridavsky, sat disheveled in his recording studio listening to his audio archive of the cat’s meows, purrs, “chirpy purrs,” snorts, and snores. “No other cat makes sounds like that,” he said with unabashed pride. “There’s like, syllables and stuff.”

Bridavsky started building his collection of Lil Bub’s noises after adopting her from a feral litter near his home in Bloomington. The cat’s sounds have been used in stuffed animals and bobble-heads, and on a full-length electronic music LP record.

And that’s just a small part of Lil Bub’s legacy. During their eight years together, the cat and the man built a small empire. Bridavsky and his wife, Stacy, run an online store, manage endorsement deals, and produce a slew of Bub content. The Bub business gives work to friends and local artists, and a cut of all proceeds goes to Lil Bub’s Big Fund, a charity for special-needs pets.

Bridavsky was devastated after his best friend’s death. “I could not really believe it; I wasn’t ready for it yet,” he said, as he began to cry.

And amid the fresh grief, he faced a secondary crisis as well: what to do with the business and charity she inspired.

Loni Edwards, founder of  The Dog Agency, sees pet influencers’ owners face this conundrum often — and she experienced it herself when her own celebrity pet, Chloe the Mini Frenchie, died in a veterinarian accident.

“Losing a pet is really hard whether it’s a pet influencer or just your personal fur-baby,” Edwards said at the agency’s New York headquarters. “When it’s a pet influencer, it has this added layer of — not only the emotional hurt — but also the financial hit, because you’re losing this business partner.”

But Edwards, who represents more than 150 pet influencers, said that for many owners, adopting another pet can be a way forward. “I think as long as the brand and the identity of the account stays consistent, it is possible to evolve.”

At PetCon, a star-studded pet expo where fans can meet their favorite famous pets, several of Edwards’ clients explained to us how they pulled off a postmortem pivot.

When blind therapy dog Smiley died, his owner Joanne George knew how to fill the void for his devoted audience. After a period of mourning, she adopted another dog with a vision impairment, Sunny, to take over the page. “Not for the social media aspect — I was good at it,” said George, a veterinary technician who rescued Smiley from a puppy mill.

Others, like Jessica Hatch of Gone to the Snow Dogs, have solved the problem by focusing their accounts on a pack rather than one animal. “It’s kind of like a lifestyle brand,” says Hatch, who has lost three of her huskies and adopted several more puppies over her brand’s 10 years.

But for Bridavsky, such a transition would be harder, if not impossible. Lil Bub was famous for her very unusual “perma-kitten” appearance, a result of feline dwarfism, and the hope and motivation she inspired among her fans. The cat’s outgoing personality and undaunted spirit in the face of her limited mobility was a tonic for many facing their own obstacles.

Many of the more than 75,000 comments on Bub’s Instagram memorial post are a testament to that. “She helped me persevere and push through tough times in a difficult relationship,” wrote Chanelclaire.co on Instagram. Another, candicemargo, commented that Bub “reminded me to keep going, to always stay kind, and that pure love does exist.” Flowerchildabbi said Bub inspired her to help special-needs animals.

“That’s, like, the whole spirit of Bub — to pay it forward,” Bridavsky said. “I didn’t know, ever, what to expect — how it would feel after she passed. But from the messages, people care about her even more now.”

So Bridavsky committed to keeping Bub’s memory alive through his business and charity. Now, he even has Bub-print face masks. “So BUB can protect you and others with her undeniable magic (and cuteness).”