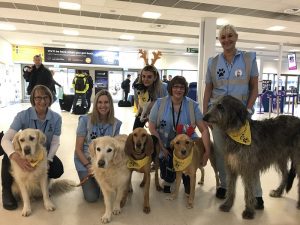 Dogs have played a role in improving airport security and enhancing passenger experience for decades. From detecting explosives to assisting travellers with disabilities, we round up how they are helping operators across the world.

Dogs are crucial members of an airports’ security ecosystem. The US Transportation Security Administration (TSA) annually trains thousands of dogs for a range of jobs, including explosives detection or prevention of smuggling.

Their employment in security lanes has been on a sharp rise since 1974 when an NYPD-owned German Shepherd managed to sniff out a bomb that had been stowed inside an aircraft at New York’s John F. Kennedy Airport, ultimately averting disaster.

The episode eventually paved the way for more dogs of a variety of breeds patrolling airports and security lanes in the years that followed.

However, multiple studies have previously shown that their detecting capabilities are not infallible – with some even mentioning a percentage error of over 50%. Although opinions on the matter are divided, the reports remain symptomatic of the fact that security operators cannot entirely rely on animal help to carry out their tasks.

They might not be of much use in the ongoing global attempt to stop the Coronavirus outbreak – as operators are currently adopting screening technologies at airports – but medicals detection dogs can be of great help when it comes to other diseases.

This is according to research carried out in 2018, which found dogs could be trained to sniff people’s odours to identify some specific illnesses, especially malaria. “While our findings are at an early stage, in principle we have shown that dogs could be trained to detect malaria-infected people by their odour with a credible degree of accuracy,” principle investigator Professor Steve Lindsay, from the Department of Biosciences at Durham University, said at the time.

“This could provide a non-invasive way of screening for the disease at ports of entry in a similar way to how sniffer dogs are routinely used to detect fruit and vegetables or drugs at airports,” he added.

Assistance for visually impaired travellers and other disabilities

Assistance dogs provide vital help to travellers with disabilities (whether visible or invisible) and medical conditions. Currently accepted on the vast majority of world flights, these hounds are highly skilled and trained to support owners through the airport and on-board aircraft.

Their role in this process is so important that the industry tends to allow them on board free of charge, although this may vary depending on the size of the animal.

However, the same cannot be said of pets who are not professionally trained to provide assistance, but are instead brought on a plane to provide comfort to their owners. Known as ‘emotional support animals’ (ESAs), these vary from dogs and cats to the more unusual iguanas and peacocks. Over the past few years, ESAs have been on a sharp rise especially in the US where several airlines have witnessed a growing number of passengers apply to carry their pets on-board.

An issue that has divided public opinion – as well as the Airport industry Review team – it was recently put in the hands of the US Department of Transportation, which proposed in February that only certified assistance animals be allowed on-board.

There is no doubt that dogs can be of great relief to stressed passengers before and after their trip. You may have heard of names like the Canine Crew, the Pre-Board Pals or the Wag Brigade. These are only some of the many initiatives airports recently adopted to provide therapy dogs to nervous fliers.

Dogs of different breeds and sizes can now be found patrolling Aberdeen and Southampton airports in the UK, Calgary in Canada, and several US hubs including Pittsburgh and Phoenix.

“The mere action of stroking a dog slows down the heartbeat and reduces blood pressure so they will be a great help to anyone feeling nervous about their journey,” Diane Wood, trustee of the Canine Concern Scotland Trust and area representative for Aberdeenshire North Therapet said after launching Aberdeen Airport’s Canine Crew. “The dogs will work in pairs, for two hours at a time once a week and we plan to keep everybody updated about what dogs are visiting and when.”

A job usually reserved for hawks – and, in most recent times, drones – minimising runway disruption caused by wildlife is something a border collie at Cherry Capital Airport in Traverse City, Michigan, used to do permanently.

Globally famous thanks to social media, the dog – who sadly passed away in 2018 – carried out patrolling strolls at the airport for four years, chasing hazardous wildlife and birds to keep its runway safe from intruders.