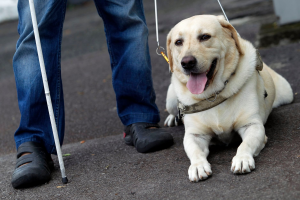 LaShawn was fighting leptospirosis in a veterinary clinic for five days, but sadly lost the battle on Sunday, reported Sin Chew Daily.

The eight-year-old guide dog took his last breath at the clinic alone last night as his owner, Stevens Chan Kum Fai, could not be with him due to the Movement Control Order (MCO).

LaShawn was recognised as the country’s very first guide dog by the Malaysia Book of Records in 2018.

He had been with Chan ever since, who is a visually impaired former entrepreneur.

After losing his sight, Chan founded Dialogue in the Dark (DID) Malaysia – a social enterprise that offers visitors a dining and exhibition experience in pitch-black settings to feel what it is like to be blind.

DID Malaysia also has an academy that provides free training and tuition to disabled youths.

Together with LaShawn, Chan had initiated countless movements and campaigns that help the disabled community in Malaysia.

Last year, Chan started a petition to ask for the government to recognise guide dogs

The petition garnered over 80,000 signatures and was submitted to then deputy prime minister Datuk Seri Dr Wan Azizah Wan Ismail, urging the government to amend the Disabilities Act 2008 to recognise animals like LaShawn as service dogs for the visually impaired, reported Sin Chew Daily.

“To put it simply, since I have LaShawn, I have never been injured and have become more independent, less reliant on others,” Chan related.

“However, when I go out with LaShawn, I still encounter all kinds of difficulties. Being chased out (of a premise) is very common for me. Perhaps, the concept of guide dogs is a new thing for Malaysians, plus the local government does not recognise guide dogs as legal ‘service dogs’.”

Free Malaysia Today quoted Chan as saying that he will continue fighting for the rights of guide dogs in Malaysia and he expressed his gratitude for the support he gained over the years.