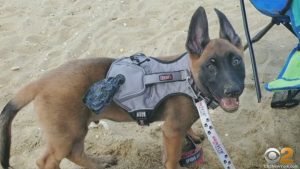 Sargent JR Luis is a Marine veteran from New Jersey who is missing his service dog in training, Apollo. JR believes his puppy Apollo, training to be his service dog, was stolen from Ideal Beach in Middletown on August 9. He lives an hour away from where the puppy was taken and has been traveling one hour to sleep in his car, trying to find his dog in the shore area. JR has been all over the news begging for the safe return of his precious Apollo. Apollo. There is a $2500 reward for the three month old Belgian Malinois. He is much more than a pet and his loss has been devastating for Sgt. Luis. See the missing poster here.

If you’ve ever lost a treasured pet, you know what pain and anguish it can cause. It’s been over two and a half weeks and his search is getting desperate. If you notice someone with a new Belgian malinois puppy that suddenly appeared two weeks ago, contact the police. The dog is pictured here in the flyer. They’re beautiful dogs that resemble a German Shephard. For those of you that live in Monmouth County, please keep an eye out. For the rest of us around the state, we can be on the look out as well. If it’s the reward money you’re after, that’s fine, but the good that you will do by helping in the return of this service animal to a brave Marine veteran is far more valuable. Let’s hope we can reunite Apollo and Sgt. Luis by the end of the week!