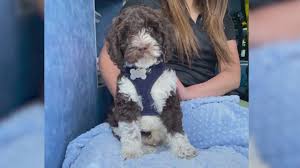 AMR just welcomed a new member to the team. He’s got an important job and will be put to work right away with his tail wagging, of course.

Riggs is a 10-week-old labradoodle and will be the state’s first AMR therapy dog. His handler, who works in human resources, at AMR will be taking care of him as he works to get his certification.

He’ll also be hanging out with all of the brave men and women who are working for AMR during this pandemic.

“I mean who doesn’t love a cuddly little furry dog to roll around and pet. It helps you relax. It helps someone open up when maybe they wouldn’t normally open up and talk about what’s bothering them,” said Regional Dir. For AMR Connecticut South, Bill Schietinger.

He says working for AMR is stressful enough and the Covid-19 outbreak has only made it worse.

“(They) make sure they’re not contaminating themselves, other patients. Taking the time to clean our vehicles and equipment and dealing with the critical patients that we’ve seen since the beginning of Covid-19. Perfect timing and Riggs will be put hard to work here.”

Riggs will be traveling around the different AMR branches in Hartford, Waterbury, Bridgeport, and New Haven.

His training is expected to take about a year. Then, his service will be shared where it is needed at police and fire departments as well as hospitals across the state.