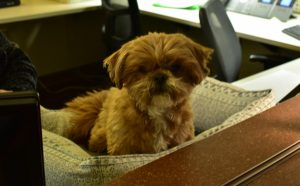 “A therapy dog in the Counseling Center is important as they provide comfort and care in a way that humans sometimes cannot do,” Cox said. “People will often receive comfort more from an animal than they will from humans due to their unconditional positive regard towards others.”

Cox said that since Leo’s introduction to the center in January, he’s been adapting great to his new environment.

“He loves people, so we are still working on the calm meet-and-greet because his love is exuberant, all 12 pounds of him,” Cox said. “He is happy to sit and give comfort and he is also happy to show you his favorite toys, which, lately, has been Sheepy.”

Cox said she’s had her dog be the therapy dog for UWO and her last campus for over nine years now.

“The positive impact [of] having a therapy dog in the center has been so overwhelming, I want to continue to offer the experience wherever I go,” Cox said. “I have always rescued my dogs and I go with my intuition of a dog that seems to also be intuitive and loving with humans.”

Cox said the previous therapy dog, Annie, who passed away last August due to cancer, was at the Counseling Center for five and a half years.

“She was my fur family and she came with me to UWO,” Cox said. “Leo and Annie have both helped students through some of the most distressing moments in their lives. They are also just pure sunshine that brings a smile to everyone’s face, which is always positive.”

Cox said students have been overwhelmingly positive about the presence of a therapy dog on campus.

“We are also sure to provide guidelines for students who may be allergic and/or fearful as well,” Cox said. “It has been a bonus that Annie was loving with humans, and Leo is really funny and joyful as well.”

Cox said Leo doesn’t have any set hours yet because he goes along with her schedule.

“We are usually out walking campus at lunchtime,” Cox said. “Clients of the Counseling Center are also welcome to talk with their counselor about scheduling Leo time.”

The Counseling Center is located on the second floor of the Student Success Center and is open 7:45 a.m. – 4:30 p.m. Monday-Friday.