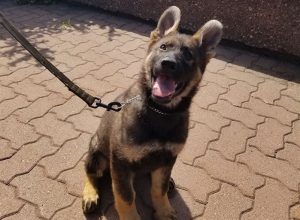 The Vernon North Okanagan RCMP is welcoming a new member to its ranks.

New Police Service Dog Nelly is 10 weeks old.  Every year, the RCMP holds a puppy naming contest with a different letter of the alphabet chosen.  This year, the letter ‘N’ and her name was selected from the Quebec submissions, according to Cpl. Tania Finn, media relations officer with the Vernon RCMP.

“Nelly is part of the RCMP puppy program and she lives with an RCMP officer who is working toward become a police service dog handler.  Her puppy handler will be responsible for teaching her to track across various terrain as well as expose her to many different situations and conditions,” she said via email.

Ever four months, Nelly will be tested, and if she passes, she’ll enter the official police dog training at the RCMP Kennels in Alberta when she’s roughly one-and-a-half years old.

“Very few puppies make it to Alberta and even fewer become police dogs.  Those dogs that are not successful in the puppy program are adopted and become family pets,” Finn said via email.

“Being a police service dog handler is a big commitment as the police dog lives and works with their handler 24/7 throughout the career of the police dog.  The pair develop a close bond which is crucial to ensuring a successful police dog as the handler learns every aspect of the dog’s personality and capabilities,” Finn said via email.