Not A Service Animal 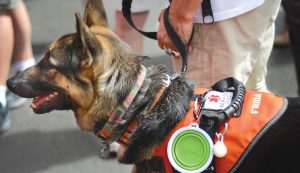 Dealing with phony service dogs is no walk in the park.

Because restaurants and other businesses are required by law to admit service animals, they could end up hosting an unruly pooch simply because it’s wearing an $11.99 service dog harness available on Amazon. And people who actually need service dogs, hampered by neighboring untrained dogs or grumpy business owners and feeling that laws about service dogs have been abused, might have more difficulty getting around.

That’s why Illinois might soon be cracking down on fake service dogs.

Under the bill, a dog would have to be professionally trained in order to wear service animal gear or enter a building where only service animals are permitted. Otherwise, the pet owner could be subject to a substantial fine.

State Rep. Anne Stava-Murray, a Naperville Democrat who opposed the bill, argued that it could be harmful to people who can’t afford service dog training. “People have access to animals that are functioning in their lives as service dogs,” she said.

Nevertheless, House Bill 3905 passed through the House Judiciary Criminal Committee. However, the fine was lowered to a maximum of $500, and the bill has an added stipulation: If passed, all fines would go to grants to help people afford service dog training.