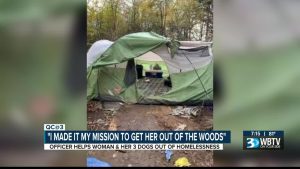 Demitris Gonzalez is legally blind and disabled, and at one point, she was living in a tent in the woods.

Her life changed when she met a Charlotte-Mecklenburg Police officer who rallied the community to help her.

Gonzalez is a senior citizen, who up until a few months ago, she was homeless and living in the woods with her three service dogs. “It was tough,” Gonzalez said.

Gonzalez and her seeing-eye dogs braved the elements while living in a tent.

The scene was unsafe. Food was scarce and support was non-existent. Her only family in Charlotte, sister Elena, was a heart patient in medical care.

“I had nowhere to go,” Gonzalez said. “I needed to get help for myself and my sister.” Hope was dwindling until CMPD Officer Kathleen Caffray, from police Animal Control, stopped by. “I made it my mission to get her out of the woods,” Caffray said. “As a blind, disabled woman I knew it was going to be very hard as it would be for anybody but especially her and her three dogs.” “They wanted me off these streets quickly,” Gonzalez said.

Officer Caffray followed her heart and went to work, creating a network of helpers that included Urban Ministries and Steele Creek Church.

The next goal was to find her housing.

“What people don’t know is it took them nine months,” Gonzalez said.

Gonzalez said that if it wasn’t for Caffray and the police department, she would be facing a very different reality.

Caffray found Gonzalez a home on a tree-lined street in Charlotte.

“We got a U-Haul and got all her stuff moved over here,” Caffray said. “I transported her dogs with the Animal Control van and we got her settled in. She’s doing much better than she was in the woods.” Through nine long months of hard work and grit, Caffrey built a stairway to Heaven for the Gonzalez family. “It makes me feel great,” Caffray said. “I’ve never actually accomplished something this big on the job. Now that I know that I can do it, I am excited to do it more for other people.”