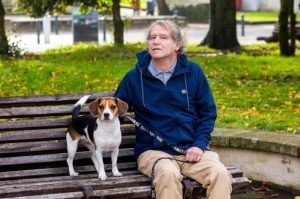 A vulnerable man who was prescribed an emotional support dog to help with mental health problems is facing eviction – because he has a dog.

Christopher Palmer, 63, was prescribed a mental wellness animal companion in the form of beagle Tammy after suffering years of depression, anxiety and mental health problems.

But despite his pet being prescribed by a doctor, Christopher is being threatened with eviction by his housing association landlord.

Plymouth Community Homes (PCH) has said he is in breach of his tenancy agreement which forbids him from keeping a dog as he lives in a high rise flat.

The organisation has offered to rehome Christopher and Tammy but the 63-year-old’s GP fears moving him from his home of eight years could make his condition worsen.

PCH took Christopher to Plymouth County Court in a bid to evict him but a judge granted him a stay of execution, saying they can stay until another hearing in January.

“There have not been any complaints. I just don’t understand it. They allow deaf dogs, so why not her?”

Dr Michaela Stoffregen, who prescribed Tammy in December, has written to PCH to urge them to allow Christopher to keep the dog.

She wrote: “I strongly advise that everything possible has to be done to let Christopher keep his little dog, as it is a lifeline for him. A move would be disastrous to his mental health in my opinion.”

PCH’s Pets Policy does make an exception for Assistance Dogs but at the court hearing Vincent Davis, representing the organisation, said Christopher had been offered the choice between re-homing the dog or moving to an alternative premises that has its own garden.

“Most tenants would jump to move from a multi-storey block to their own garden but Mr Palmer has not engaged with that,” he said.

“Various efforts have been made but he has not engaged with the process. This is a long standing policy that was adopted in 2011/2012. The reasons why you cannot keep pets in a high rise flat is the nuisance it causes to other neighbours.

“We recognise the benefits to having a pet but to have one in such close proximity to others causes problems with urine and faeces in communal areas.”

But Judge Vanessa Priddis said: “If Mr Palmer was blind and had a guide dog would we say the same?”

“He is disabled and ten minutes to deal with and make a decision on this is not fair. There are technical and legal issues to consider.”

The case will resume on January 9 2020 when a hearing will look at aspects around the equalities act and how they correlate with Christopher’s case.