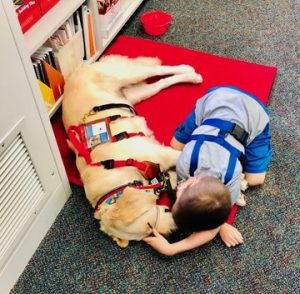 Life for a family in Greencastle, Franklin County has been changed, as they’ve welcomed their first service dog into their home.

They say it’s all thanks to the community who helped fundraise.

Back in 2017, abc27 brought you to the bingo fundraiser for the Woodruffs.

They were thrilled when they hit their $17,000 goal for a service dog, but they could’ve never imagined the difference Vargas would make as he entered their home, three years later.

The bond between Vargas and Jordan Woodruff is one you just have to see for yourself.

Eight-year-old Jordan is the happiest he’s ever been, now that Vargas is by his side. “He does great work for Jordan,” said Jeffrey Woodruff, Jordan’s brother. Jordan has autism.

“He’s an eloper,” said Jacqueline Woodruff, Jordan’s mom. “He will actually take off and run, and he (Vargas) is actually trained to find him. He can find him based on his cells, the dry cells that fall to the ground. He can actually track him.”

The two are attached at the hip, literally, whenever they’re out.

“If he tries to run away, we can just put Vargas in a down, and he will just sit there and Jordan won’t be able to go anywhere,” said Joshua Woodruff, Jordan’s other brother.

Jordan’s parents used to always have to physically hold onto him.

Now, they can enjoy the little things.

“Going out to eat was a thing that did not happen,” said Aaron Woodruff, Jordan’s dad. “Now we go pretty much every Sunday after church.”

They go every Sunday since the spring, which is when Vargas came into their lives.

The pup is a calming presence, who helps Jordan focus.

Jordan and Vargas have a new morning routine, as they head to school together.

They both love the bus.

Once Jordan gets on that bus, his parents are confident he’ll be noticed by kids at school in a positive way. They say Vargas broke the social barrier.

“It’s just amazing to see that, that someone sees my child,” said Jacqueline Woodruff.

The Woodruffs got Vargas through the nonprofit 4 Paws for Ability.