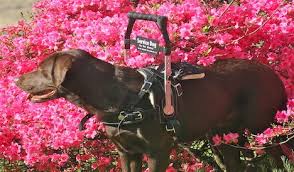 Paws Giving Independence is a service dog program based in Peoria that trains dogs to help people with various disabilities.

During the pandemic, training looks different and PGI is finding new ways for trainers to teach important skills.

“There’s still people out there that have disabilities and need these dogs,” said Michelle Yuen, director of animal intake and training.

Soon, the service dogs will help people in wheelchairs and alert owners to medical issues like seizures.

“These dogs really are essential workers,” said Yuen. And training is key.

“Sometimes it can be the difference between life and death,” said Donna Kosner, director of community outreach, education, and applications.

So, Paws Giving Independence is getting creative.

“Our training has changed a bit with social distancing and just with the changing of the standards of groups,” said Yuen.

“A lot of our dogs have been training mainly at home, so the skills carry over at home is similar to in public but again it’s definitely not the same,” said Yuen.

Training in public is a huge part of working on service dog’s skills.

To help, Northwoods Mall is stepping up.

“We trained regularly at Northwoods Mall before all this happened, so the fact that they’re inviting us back here is really great,” said Kosner.

In small groups, trainers are now able to work with dogs, giving them real life experience.

“The dogs can practice still one on one with some of the skills that they need to learn,” said Yuen.

The trainers and dogs are making the current circumstances work in an effort to serve people with disabilities in the area.

“We’re really trying to find creative ways to get our dogs safely and keep the community safe,” said Yuen.

Leaders say they hope to continue training at Northwoods Mall while it’s closed to the public.