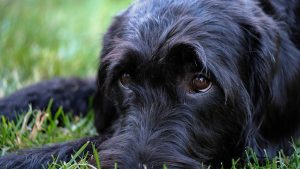 Service dogs play a big part in people’s lives, and a Kentucky school wanted to pay tribute to a special canine.

Hadley Jo, 7 was diagnosed with epilepsy when she was 16 months old, according to The Record. Ariel, her chocolate labradoodle service dog, was bred and trained to be a seizure dog for Hadley Jo, the newspaper reported. The dog was bought for $20,000, funded by parishioners of St. Patrick Church, which counts the Lange family as members, The Record reported.

Doctors at the Cincinnati Children’s Hospital Medical Center discovered that “abnormal brain waves” were causing Hadley Jo to have seizures.

“My heart froze,” Lange told The Record. “What can we do about it?”

The family had a revelation when Hadley Jo was at her babysitter’s home. A German shepherd was trying to pull the child to the floor, Lange said. The dog apparently detected the onset of a seizure and was trying to get the child safely onto the floor before a convulsion could knock her down and cause an injury.

“That was a turning point,” Lange told The Record.

Lange began researching service dogs and settled upon Ariel. Seeing the dog honored in Hadley Jo’s yearbook was a happy moment, she said.