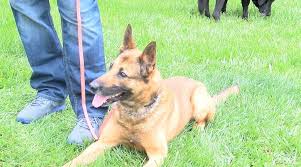 Some eastern panhandle residents have found a charitable way to match their love for dogs and ties to law enforcement and service veterans groups.

These special canines have served with handlers in the military and law enforcement on dangerous explosives — or narcotics — detection assignments. But the day comes when we all have to retire. And for black lab, Duffy, and Yellow Lab, Buddy, and Shepherd-mix, Remi, that day has come. Their tours of duty in Iraq and Afghanistan are behind them. But they are in the loving care handlers who raise funds for these retirement years when vet bills can become expensive. Paws of Honor (www.pawsofhonor.org), founded right after 9-11, has delivered more than a million dollars in veterinary care to these dogs.

Group organizer Elaina Maze said, “most people don’t realize that when these dogs retire from service they’re decommissioned with no benefits, unlike their human counterparts.

Paws of Honor has more than 200 dogs in its care right now.