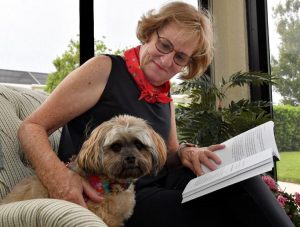 While Henry doesn’t talk much, he is great company.

Ellie Cutuli’s 4-year-old shih-poo, a cross between a shih tzu and a poodle, notices that she’s home more. She talks frequently with him, as she is not able to dine with friends or play cards like she normally does.

Villagers who are usually active attending events, participating in club meetings or socializing like they normally would are being aided by pets, helping them adjust to a new normal.

“He’s just staying closer around me, around the house. If I move from one room to the next, he’s there,” said Cutuli, of the Village of Antrim Dells. “I think he yearns for the company just like I do.”

Lately, Cutuli spends her time reading or watching television, with Henry by her side.

When things resume to normal, Cutuli plans to take Henry everywhere with her, such as on golf cart rides.

Henry doesn’t mind spending a few hours alone, but since spending all of their time together now, she plans to bring him more places when her activities resume.

Meanwhile, he’s been enjoying the extensive walks with her and having her around all of the time.

“If I’m reading in the lanai he’s there,” she said. “When I’m watching TV, he’s right there in the living room. I’m blessed to have him because otherwise being home alone during this time — it’s hard on anybody.”

Wendy Aimola, of the Village of Osceola Hills, has Morgan, a 2-year-old miniature goldendoodle, who was training to be a therapy dog this winter. At that time, Aimola’s dad was in a physical rehabilitation center after spending a month in the hospital.

She would bring Morgan into the rehabilitation center to visit her dad, to share her puppy with others, while swelling with a sense of pride.

“It was just the highlight of his day,” she said. “The residents and everyone would just light up.”

Morgan was certified on Valentine’s Day.

Then everything ground to a halt.

On their walks, people who used to stop to pet her, were now walking right by, nervous about virus concerns, Aimola assumes.

But while everything has seemed to slow way down, Aimola felt lucky she and her husband have a cute little dog to keep them contented and amused.

She catches herself repeating to her husband how thankful she is they got her.

“With everything being closed, the ability to take her for a walk, it gives you a reason to get out of the house,” she said, “and getting moving was really important to me. I probably would have just stayed inside and worked.”

Morgan’s antics make her laugh, such as when she gets on her back and squirms around on the carpet.

The goldendoodle is the comic relief she needs.

Jane Barry, of the Village of Dunedin, has Benji, a 10-year-old terrier mix.

While Barry is used to playing mah-jongg or going for swims, lately she’s been playing it safe. She sticks around home most of the time, reading nonfiction history books with Benji curled up near her.

As a widow, she finds comfort with Benji and said she talks to him often.

“He keeps me going,” she said “Just that something might happen to me and he’d have to go to someone who doesn’t love him—that keeps me going. And I think that’s important.”

Benji has been by her side more than usual, perhaps sensing her desire for his companionship.

The two enjoy a daily routine that starts with breakfast together, and then Barry takes Benji out for his walk. But he decides how long the walk will be and where they will go out of two choices: the neighborhood or the paths by Colony Cottage Recreation Center.

The two will go outside, and if Benji doesn’t want to walk in the neighborhood, he’ll go back inside and head to her purse, she said, which means they’ll drive over to Colony to walk.

“He’s just my pal,” she said. “He sleeps with me, and if I’m sad he sort of really hangs around. He’s just a great companion. Benji is all I have, really, and we’re just very close.”