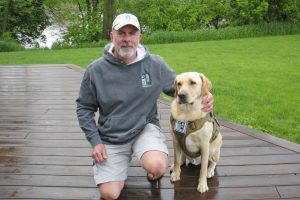 Because of restrictions like cost and training time, less than 1% of veterans in need of a service dog can obtain one, according to Purina’s Dog Chow. That’s why the dog food company is running its 3rd annual Service Dog Salute campaign, which is committed to providing resources to groups who train and place service dogs with veterans. The end goal of this campaign — which starts in September, National Service Dog Month, and runs through Nov. 26 — is to create a future where “every military hero in need can find a canine hero of their own.”

Animal lovers can help Dog Chow reach this reality by buying bags of specially marked Dog Chow during the campaign. For each purchase of one of these bags, Dog Chow will make a donation to its two partnering veteran service dog organizations: The Tony LaRussa Animal Rescue Foundation’s Pets & Vets program and Got Your Six Support Dogs. Dog Chow will split the donations (up to $100,000) equally between the two partners

Similarly, Got Your Six Support Dogs also trains canines to be service animals and is committed to providing these specialized service dogs to veterans and first responders suffering from PTSD free of charge.

The numerous dogs that both organizations have already placed with veterans quickly changed the lives of their owners. U.S. Army Staff Sergeant Leon Alexander met his service dog, Bob, three years ago thanks to Got Your Six Support Dogs, and it only took the canine three days to have a big impact on his life.

“My PTSD became an aspersion that was cast over my relationship with my family, which made it hard for me to talk about my military career with my children,” Alexander said. “Just three days after receiving my service dog, I met my children for dinner. During the dinner conversation, we started talking about Bob my service dog. ”

“And before I even knew it, I was talking about my military carrier and my PTSD. I was in the military for over 15 years and I was never able to talk to my children, I had Bob for a little over 36 hours and within a two-hour dinner conversation, I was able to open up and have an amicable conversation with my children,” he added, also crediting Bob with bringing “the skill of empathy back into my life.”

Former U.S. Army Captain, Paul Sherman Whitmer, who also got his service dog (also named Paul) thanks to Got Your Six Support Dogs, saw positive changes to his life immediately after welcoming Paul the dog into his family.

“Leaving home is no longer avoided – as a matter of fact I enjoy taking Paul with me wherever I go – his presence by my side is just a given,” Whitmer said. “I do not go anywhere without him. Going somewhere without him is almost unimaginable. We have not been apart since pairing – never.”

It’s because of results like this that Dog Chow wants to ensure that service dogs are available to all veterans who need them. Along with bringing back the Service Dog Salute campaign, Dog Chow and Purina are also working with members of Congress in support of federal legislation that would provide training and service dogs for veterans. The PAWS for Veterans Therapy Act (HR4305) would create a pilot program in the VA to give veterans access to treatment derived from working with service dogs. The bill has been approved by the House, but still awaits passage in the Senate.