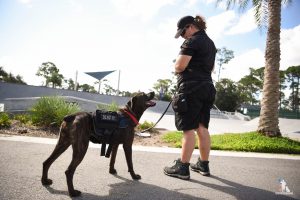 K9s For Warriors on Tuesday said the donations would not only benefit the Neptune Beach, Atlantic Beach and Jacksonville Beach police departments, but would also provide the dogs a new supportive, family environment.

The dogs — Jamie for JBPD, Duke for NBPD, and C4 for ABPD — will serve as “station dogs. That means the dogs will not be doing K9 work, but serving in a support role by providing comfort and companionship to officers at the station.

“K9s For Warriors knows the positive power that the companionship of a dog can bring to those who most need it. We see it every day in the veterans we help heal through this companionship and it is so rewarding for K9s to be able to provide these station dogs to serve our local police,” said Rory Diamond, K9s For Warriors’ CEO.

K9s For Warriors’ chief of staff and general counsel Patty Dodson added, “It’s beyond rewarding for us to give back to others in uniform who so valiantly serve and protect us. We have keen insight into the power of dogs to alleviate stress and foster emotional wellbeing. We’re honored to provide our vital police departments with a new, four-legged team member who may be able to promote the department’s overall wellness.”

The nonprofit compared the scenarios encountered by police to those encountered by military veterans, which is the primary demographic served by K9s for Warriors. The similarities include increased rates of suicide and self-harm, higher turnover and attrition, revocation of benefit plans, hostility against police unions, and even overt physical attacks.

The donations are being met with a warm reception by the top brass at the police departments.

“Officer wellness is a top priority for the Atlantic Beach Police Department,” ABPD Commander Tiffany Layson said. “Being able to partner with K9s For Warriors to get a facility dog has added another positive component to our overall wellness program. We hope that spending a little time with our new dog, whether it’s tossing a ball down the hallway or taking her for a walk, will give our first responders a tool to decompress and destress on a daily basis.”

K9s for Warriors said the police departments have a plan in place to care for the dogs, including setting aside a place for them to settle and voluntary programs that encourage officers to engage with the dogs and make them “one of the team.”