Veteran And His Dog 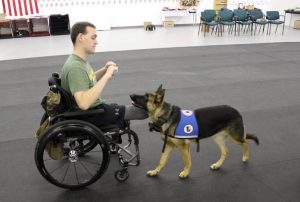 .It wasn’t exactly the tender, affecting environment for love at first sight.

But when double lower amputee Marine Sgt. (ret.) Patrick Brown and an anxious German Shepherd Dog puppy Drea first cast eyes on each other in August 2017, a union of soul mates was established.

That dream moment occurred at a Mutts With A Mission meet-and-greet in Portsmouth, Virginia. The agency provides service dogs for those who served on active duty and have a service-connected disability, as well as law-enforcement officers, First Responders, and federal agents.

The AKC 2020 Humane Fund Awards for Canine Excellence (ACE) Service Dog finalist recalls that first meeting. “Brooke (Corson, executive director) called me and told me the dog arrived from Arizona and was out of sorts. She had left her Mom, had her first plane and car rides, all of which was pretty trying. She was hunkered down and didn’t want to leave her crate with a room full of strangers. When I arrived, Brooke opened the crate and Drea looked out and ran right over to me. Brooke smiled and said, ‘She is definitely yours.’”

But Brown’s stirring story had plenty of twists since being seriously injured in an explosion in Afghanistan in 2011 and since undergoing 62 surgeries.  He returned stateside to Bethesda Naval Hospital soon afterward, where he was treated inpatient and outpatient through 2015 with a family member living in nearby quarters from 2013-2015.

In 2013, he began considering a service dog but a resident program utilized only Labrador Retrievers and Golden Retrievers. “My heart was set on a German Shepherd,” he emphasizes.

It was not until he retired in 2015 and came to live with his parents, James and Susan Brown, on three acres in Chesapeake, Virginia, did that begin to appear to be a solid option.

The conduit here was Renice Zimmerman, a nurse case manager and member of his treatment team. “His needs from me were minimal,” she says, “except we talked about a service dog and his true desire to own a GSD.”

Zimmerman reached out to her friend, Corson, about training a German Shepherd for Brown. Zimmerman had been showing dogs since 1986 and placed feelers out with her wide network of AKC dog-world friends to find Brown a puppy. Quickly, potential candidates began to surface but finding the right match fell on Corson. Within three months, Corson felt she had found Miss Perfect, i.e. Drea.

Patrick and Drea’s journey was a bit different for the organization, where others usually handle the puppy raising, then turn the eventually well-socialized dog back to Mutts With a Mission for finishing and matching up with a recipient. Corson and Brown worked together from Day 1 to graduation two years later at the Assistance Dogs International accredited facility.

“Patrick was very good about attending training classes several times a week,” adds Corson. “Hence, he wanted to make certain he was raising Drea correctly. Life with a puppy can be challenging and adding a life-changing disability to the mix makes it even more so. Patrick had a terrific attitude during training and the two have grown together into a great working team.”

Brown has continued re-enforcement training with the 70-pound Drea at home. But should any issue arise, he is on the phone or computer quickly with Corson to discuss a solution, which is usually resolved during the next tune-up visit to the Mutts With A Mission training headquarters, only 40 minutes away from home.

Wondering how this 3-year-old GSD acquired her name?

Drea is a Greek girl’s name, meaning courageous or daring, which Corson chose because it fit Brown’s long battle back from amputations following an explosion during a special mission in Afghanistan in 2011, his second deployment. “It’s a perfect fit,” smiles Brown.

Here’s the scenario leading to Brown’s injuries, which resulted in the total loss of his left leg and partial loss of the right: An intelligence report revealed that a town about eight miles from his small base had become a hotbed of activity for bomb makers. His unit’s challenging mission was to kill or apprehend the bad guys while carefully navigating about compounds full of explosives.

They knew exactly what they were doing, he says. “They had started making bombs with almost no metallic material, which made it almost impossible to detect them.

“I still remember the explosion, followed by the absolute worst pain I had ever felt. Then I blacked out. A few minutes later I remember being loaded onto a CASEVAC (casualty evacuation) helicopter and hearing a female medic telling me, ‘You will be OK.’ When I opened my eyes again, I was lying in a bed at Bethesda. I had been there for two months.”

Turns out Brown had stepped on a 31-pound homemade explosive designed to hit vehicles or larger groups of troops. It left a 12-foot crater in the ground and changed his life forever.

So what’s the daily regimen for Brown and Drea?

“As I get moving in the morning, Drea is fed and enjoys some downtime playing ball. After that the vest is put on and she reverts from a playful partner to a 3-year-old service dog.”

Drea makes life easier for Brown by closing drawers at home, picking up fallen items off the floor, whether it’s a pen that fell off the desk or a wallet that dropped after paying for items at a nearby grocery store. And she is adept at pulling Brown’s wheelchair when the need arises. There is a handle on her vest that enables Brown to grab and then command “walk up,’ from which she begins pulling him. She knows her right from her left and will go in the commanded direction until Brown says, “OK.”

One of her most memorable assists Brown adds, came when his wheelchair hit a crack in a parking-lot pavement and the owner tumbled out. “It rolled just out of reach so I told her to ‘get chair.’ She took hold of the tug handle on the chair that was added just for this situation and pulled it over to me. Without her, I could not have reached the chair and would have needed to wait until help arrived,” he recalls with tender reminiscence.

At home, Drea is the only pet, although Brown’s sister, Harley, and her boyfriend, Henry Murach, have two dogs that visit on occasion. Murach’s 9-year-old terrier mix Rosco and Drea are the best of tug-of-war buddies. “It’s the perfect outlet for Drea after a full day of working alongside me,” Brown concludes.