Pooches Hanging Out On Patios 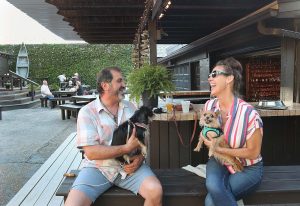 Pets have been a comfort for many during the ongoing pandemic, helping people to feel less isolated.

So dog owners and fans will be happy to know that as restaurants reopen in Ohio after an approximately two-month shutdown, some area establishments are again welcoming pooches to hang out on their patios and decks.

“You have a cocktail, pet some dogs and become human again,” said Mike Juskiw, who is dogless, at the homey Old 97 Cafe bar/eatery in Akron’s Kenmore neighborhood last Wednesday, the first night of the place’s Paws on the Patio for the season.

“I don’t have time for one, but I come down here and play with them,” said Juskiw, an engineer.

Every Wednesday through Sept. 23, your fur baby is welcome on the patio, an oasis dotted with flowers and shrubs nestled behind the Cafe 97 building at 1503 Kenmore Blvd.

This year, the bar — known for its creative cocktails — marks 10 years under the ownership of Debbie Chapman, who has seen to it that the place — once a trolley stop (hence the Old 97 name) — maintains a vintage vibe.

The brick building was a trolley station until 1947, and became a bar decades ago. Chapman purchased the property — with a long mahogany bar in 2008 — and set about adding to the vintage vibe with old and other items, including wood corbels (brackets) and shelves inside, as well as outside on the patio.

Last week, Chapman had her Welsh corgi, Hemingway, with her for the first Paws on the Patio of the season.

While Wednesday is the official night for dogs, she said they are welcome any day.

“We’ve never had a problem,” she said, echoing owners of other area establishments who also feature doggie evenings. “The dogs are on leashes. We put water dishes out and have some treats.”

And this season, Old 97 — and every other bar and restaurant — must follow mandatory rules allowing them to reopen, including following social distancing protocols that call for 6 feet between parties or barriers if that distance cannot be maintained. Servers and bartenders are required to wear masks.

It should be noted that the Centers for Disease Control recommends that pets do not interact with people outside the household. This is because there is a small risk that people with COVID-19 could spread the virus to animals.

The CDC also says “there is no evidence that the virus can spread to people from the skin, fur or hair of pets.”

Right now, D’Agnese’s Pooches on the Patio is being offered on Tuesdays. That’s because the eatery, while it gets up to speed after the pandemic shutdown, is not open on Mondays, its traditional night for the doggies.

This season, D’Agnese’s outdoor dining — in demand by folks not quite ready to eat inside a restaurant — has been expanded. Now, in addition to the tables on the patio, there are several outside the patio area.

This way, there’s space for people who might not be keen on the dogs to eat outside on Tuesdays, noted chef and co-owner Joe Gallagher.

The doggie menu features treats such as lamb and rice and chicken and vegetables.

“We’ll change it up,” so it won’t always be the same, Gallagher said. “I don’t know if the dogs care that much, but the people enjoy it [the different selections for their pets].”

Again, the pooches can enjoy a savory frozen treat, such as a veal demi-glace popsicle.

Gallagher unleashed the dog event soon after the eatery opened in 2010. He had offered a similar event at the former Bisto in Bath Township.

Gallagher and his wife, Rachel, have an English bulldog named Henrietta, who likely wouldn’t do well at Pooches on the Patio, Joe Gallagher said.

Yappy Hour runs from 5 to 8 p.m. Tuesdays in June through September.

A $10 donation to a local nonprofit animal group gets patrons a glass of wine, beer or soda and the chance to win a prize.

Dogs are only allowed outside the winery. State law doesn’t allow dogs — except for service dogs — inside drinking and eating places.

“This is a safe way to go out and have some fun,” said Winery at Wolf Creek manager Kelcie Erbse, noting that these days some people may feel more comfortable outdoors.

The winery has a lot of outdoor space, she said, with a lot of room for customers to spread out.

On a related note, the winery’s annual Goat Derby (a riff on the Kentucky Derby) will be Sept. 5 — when the derby is set to run this year. Closer to that date, the winery will ask people who plan on coming to sign up at the online Eventbrite site. There is no charge for the Goat Derby, but sign-ups are encouraged for planning purposes.

The Italian-American eatery next door to Southgate Park (also dog friendly) has resumed its Pups on the Patio, which runs from 4 p.m. to close Monday to Saturday on the lower level patio throughout the summer.

Nichole Cardinale, spokeswoman for Twisted Olive and sister operation Gervasi Vineyard, said dog owners can take a stroll with their pooch at Southgate or the Ariss dog park in Green and then stop by the eatery with their pet.