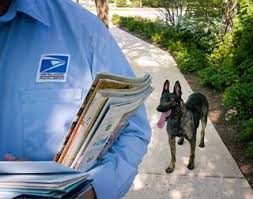 The number of U.S. Postal Service employees attacked by dogs nationwide fell to 5,803 in 2019 – more than 200 fewer than in 2018 and more than 400 fewer since 2017. The Postal Service has new technology tools to help reduce dog attacks.

The theme for the 2020 U.S. Postal Service National Dog Bite Awareness Week, June 14-20, is “Be Alert: Prevent the Bite.” The campaign addresses aggressive dog behaviors that pose serious threats to the more than 80,000 Postal Service employees delivering mail and how communities they serve can play an integral part in their safety.

“During this difficult time, our letter carriers are delivering mail and they need our customers help to do it safely,” said Sandusky Postmaster Monica Kietzke.

According to Kietzke, technology supports carrier safety in two ways: Mobile Delivery Devices, handheld scanners used by carriers to confirm customer delivery, now include a feature to indicate the presence of a dog at an individual address; and Informed Delivery which alerts customers to mail and packages coming to their homes, and allows customers to plan for the carrier’s arrival by securing dogs safely.

When a carrier delivers mail or packages to your front door, place your dog in a separate room and close that door before opening the front door. Dogs have been known to burst through screen doors or plate glass windows to attack visitors.

Parents should remind children and other family members not to take mail directly from carriers in the presence of the family pet. The dog may view the carrier handing mail to a family member as a threatening gesture.

If a carrier feels threatened by a dog, or if a dog is loose or unleashed, the owner may be asked to pick up mail at a Post Office location or other facility until the carrier is assured the pet has been restrained. If the dog is roaming the neighborhood, the pet owner’s neighbors also may be asked to pick up their mail at the area’s Post Office location.