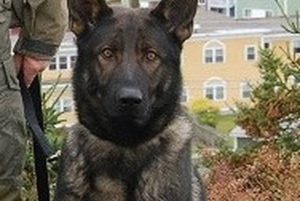 A 27-year-old man whose vehicle had struck a RNC patrol car in St. John’s and fled the city Wednesday afternoon was found by the RCMP police dog service hiding in the bushes near Cape Broyle on the southern shore about three hours later.

Clarence Cantwell was arrested and is facing a number of charges including assault with a weapon, dangerous operation of a motor vehicle, assaulting a peace officer, obstruction of justice and breach of probation.

About 3:30 p.m. Wednesday, the RNC in St. John’s received a report of a suspected impaired driver on Waterford Bridge Road.

The RNC patrolled the area and located the vehicle, a two-door older model burgundy Lincoln Mark Vii, parked on a parking lot off Waterford Bridge Road. As police pulled into the parking lot, a man got out of the vehicle, spoke briefly to the officer, got back in his vehicle and fled the scene at a high rate of speed, striking the police car and leaving it inoperable.

The RNC confirmed the driver of the Lincoln was Clarence Cantwell and notified the RCMP of the situation, while police continued to patrol the City of St. John’s searching for Cantwell and the Lincoln.

At approximately 4:30 p.m., Ferryland RCMP received a report of a damaged older model burgundy Lincoln, with smoke coming from underneath it, parked at the Ultramar in Cape Broyle.

A man matching the description provided by the RNC was seen walking away from the vehicle. Police confirmed this was the same vehicle that fled from the RNC.

RCMP officers from Ferryland and Holyrood traffic services, and police dog services, responded to the scene. At approximately 6:30 p.m., RCMP Police Service Dog Kaos located Cantwell hiding in some thick bushes at the end of Southside Road in Cape Broyle. He was arrested without further incident and turned over to the RNC.

Cantwell was scheduled for a court appearance Thursday.