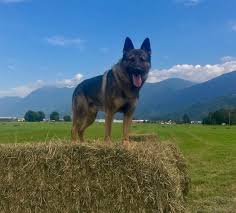 There was no time to ask Dr. Bonnie Henry for a special exemption from social distancing as police service dog Griff caught a suspect in the middle of a break and enter at a ranger station at the Chilliwack Lake Provincial Park.

“On May 2, Griff was conducting foot patrols with his Integrated Police Dog Service human police partner when the pair heard a loud bang coming from the Ranger Station which had been the target of a recent break-in,” according to the RCMP in a press release.

“The IPDS was in the area to do pro-active patrols because there had been a break-in at the station,” said Corporal Mike Rail, spokesperson for the UFVRD, according to the news release. “An investigation into the source of the noise led Griff in a close face-to-face with a man allegedly attempting to break into the station. The 46-year-old man was quickly arrested by police.”

The man was later released from custody and all circumstances of the investigation are being forwarded from the RCMP to the BC Prosecutors Service for their assessment of criminal charges.

“From one hero to another, Griff begs Dr. Bonnie Henry’s forgiveness for the social distancing faux paw, just this one time,” according to the release.