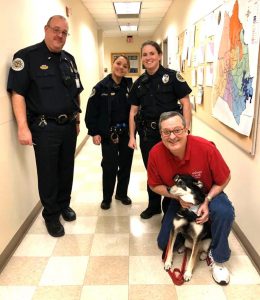 Ron Leonard, a first responder chaplain in the Middle, Tenn., area of Nashville, dropped the U-B a line the other day to raise awareness for a service that’s available in many parts of the country, but as of yet not in the Northwest, according to their website.

Ron describes it as a ministry of reconciliation in the midst of crisis to law enforcement, firefighters, first responders, 911 dispatchers and those who are hurting.

Ron retired in 2004 from the Army National Guard. He and wife Marilyn Leonard have Molly, a therapy dog they team with through Canines For Christ Therapy Dog Ministry, Inc.

Nine years ago, the Leonards rescued Molly, a labrador-German shephard mix. The 6-week-old pup and her mother had been left out in 18-degree weather to die, he said.

“From the start we knew God had special plans for this precious dog,” he said.

Since 2012, when the couple learned about volunteering with the canines ministry, Ron has taken Molly on more than 5,000 visits to bring “joy and laughter to all those she meets.” Marilyn supports those efforts, keeping Ron in prayer and by providing homemade treats to first responders.

“Molly is on standby to respond to trauma-related events and called out as needed. Molly and I also visit our police and first responders on a daily basis to say they matter.”

“When we visit Molly is a ‘ministry of presence’ who brings a calmness to an already stressful job,” he said.

The pair have been busy during the COVID-19 shutdown, delivering free pizza to frontline healthcare workers at Tristar Summit Medical Center in the Hermitage area in Nashville, according to an April 3 report on WZTV Fox 17 Nashville.

Leonard felt compelled to recognize the doctors and nurses for their hard work, WZTV reported.

In 2017 they began reaching out to 911 dispatchers and first responders across the nation. It is a much-needed ministry to hidden heroes who daily protect and serve their communities, Ron said.