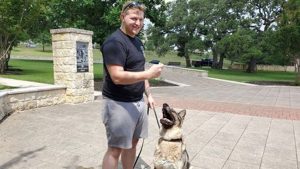 U.S. Army Sgt. Jake Ferkin was reunited with his Retired MWD, Iskra T160, after being separated for two years. Iskra is a 10-year-old Czech Shepherd who was a Patrol and Explosive Detection Dog. Sgt. Ferkin and Iskra were paired up in February of 2016, and trained for three months before deploying on missions to New York, Jerusalem, Sicily. After the “world tour”, the pair were deployed to Iraq, where they spent the duration of their time together. They were separated in 2018 and it was rough for Sgt. Ferkin. He was comforted knowing they would be reunited once Iskra retired. Mission K9 Rescue picked up Iskra in Ft. Myer, Virginia, and drove her 1,600 miles to Boerne, so the pair could be together again. “I am so excited and thankful to be reconnected with Iskra,” Ferkin said. “I cannot wait for her to be able to enjoy her retirement and have her take her place on Fort Couch.” It is important to honor and protect all of our military heroes; both two and four-footed,” said Kristen Maurer, president of Mission K9 Rescue. “Military Working Dogs have been a vital, life-saving part of our armed services, and they deserve our support when they can no longer work. We’re honored on this Memorial Day Weekend to have been able to make this journey in order for Sgt. Ferkin and Iskra to be reunited.