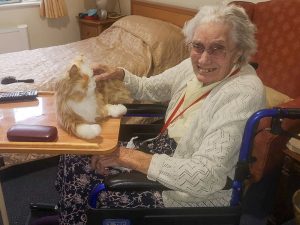 When Hythe View nursing home had to close its doors to all but essential visitors in March, the Pets as Therapy dogs could not make their regular visits.

Activities coordinator, Heather Heath noticed that many of the residents were missing the interaction with their furry friends, and the comfort and companionship the animals provide.

After researching alternatives, the home on North Road in Hythe, Kent invested in two robopets.

These robotic pets respond to interaction from the residents and have the look and behaviour of the real thing.

Bonzo the dog and Simba the cat – as named by the residents – have been at the nursing home for most of lockdown and the response from the residents has been remarkable, especially for those who have dementia.

Heather said: “Residents who routinely engage with them have become less agitated, their mood has improved, and it’s reduced their reliance on calming medication.”

Bonzo and Simba promote a very relaxing environment and bring a lot of joy to the residents, often triggering memories of their own pets.

In addition to offering companionship, they have also increased the social interaction between the residents.

Heather added: “Beatrice and Hazel love sitting together with their pets and stroke the animals while chatting to each other.

“It’s heartwarming to see their smiles as their particular pet responds to their touch and voice. Staff have seen some great changes in the residents. Heather also points out that Simba and Bonzo don’t just appeal to those with dementia as many of the residents are aware that the pets are robots, but they still get a lot of enjoyment and comfort from them.