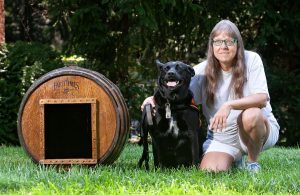 Ruger is an all-American dog with a billboard to prove it.

The 5-year-old Belgian Malinois-pitbull mix from Bentonville is trained in search and rescue, specializing in finding missing pets. Recently, she was selected as one of 10 winners among about 16,000 applicants in the Early Times All-American Dogs social media campaign.

Early Times Kentucky Whiskey has honored Ruger and nine other “All-American” dogs from around the country with a photoshoot, a billboard and a whiskey barrel doghouse. Ruger’s billboard is in Stephens City near U.S. 11 and Va. 37.

Considering the thousands of submissions, she said, “I was just blown away.”

Jones, who operates the business Full Tilt Tracking LLC, got into search and rescue after she hired Dogs Finding Dogs out of Baltimore to track down her son’s missing dog in Front Royal.

“We didn’t eat, we didn’t sleep. We looked for that dog around the clock,” she recalled.

Afterward, she realized that she wanted to help others find their missing pets, too.

“That was a job I could really wrap my heart around,” said Jones.

Ruger finds lost animals by sniffing their scent from a household item. She narrows down the area where the pet is hiding, and Jones might then either set out a trap for the animal or lure it using its owner’s scent.

“People want to be found, but animals don’t,” she said. “You’re trying to trigger that recognition in them.”

In one of her favorite memories, Ruger helped find a lost dog named Willie in the George Washington National Forest. She located the area where Willie was hiding, and his owners walked the trail before Jones directed them to return to their car and leave all the doors open — “so that their scent would blow out into the night.” This left Willie “a scent trail to follow,” she said, and a few minutes later, he came bounding down the trail to the car. “It’s a rewarding job, I love it,” said Jones.

“We have a great team that goes through all of the entries,” he said in a Tuesday phone call. “Really, what we’re looking for is dogs that are All-Americans.”

What that indicates, he said, is a dog that exemplifies the core values that have kept the Early Times brand alive since 1860 — hard word and dependability.

The idea for the yearly calendar grew from a partnership the company has with K9s for Warriors, a nonprofit that trains service dogs for veterans suffering from post-traumatic stress disorder (PTSD), traumatic brain injury, and other trauma resulting from post-9/11 military service, an Aug. 17 company release states. “To date, Early Times has donated $200,000 to K9s For Warriors,” the release states.