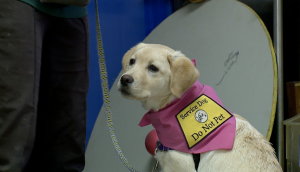 The pilot program putting fuzzy, four-legged counselors in Hamilton County schools is in talks with “several” other schools about expanding the program for the 2020-2021 school year, despite uncertainty about in-person instruction in the fall.

Circle Trail in Pleasant Plain was established in 1997. Executive director Marlys Staley left a life as a physical therapist to start the organization.

Kreines coordinates Circle Tail’s partnership with the HCESC to place dogs in schools, which began in January. Circle Tail sponsors the dog by paying for everything, including food and crates. “What we’re seeing in the schools now is obviously the stress level,” Kreines said. “What we’re finding is how magical these dogs are.”

Evan started on his training track to be a service dog helping those with special needs. But when he began visiting the Ohio Reformatory for Women, it became clear that his talents were more intuitive.

“He almost would sense which people needed him,” Staley said. “The ladies would walk him around the prison and there was a woman off to the side crying, and he stopped and wouldn’t go with his handler, like ‘Nope, we’ve got to go check her out.'”

Circle Tail’s service dogs are well-rounded — they can open doors and drawers and turn light switches on and off, among other things.

But Evan was clearly best suited for therapy work.

“When you’re doing some of the training, they’re like, ‘Seriously, you’ve already dropped that pen twice, you can get it yourself,'” Staley said. “Their work ethic is not like some of the labs that are just always ready to do stuff for you.”

It’s not just work ethic. A therapy dog also has to have superior social skills.

Walk the halls of St. Xavier High School (whenever it is safe for students and their golden guidance counselor to return) and you’ll see Evan’s appeal.