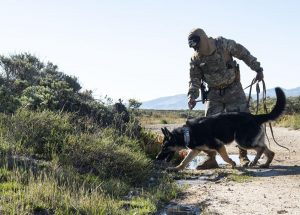 During the training, the squadron’s military working dog and handler teams faced a test of endurance and readiness as they rucked approximately 2 miles from the kennels toward Wall Beach and back.

“The ruck helps handlers understand the dog’s fatigue level,” said Staff Sgt. Stephen Sanchez, who also works as a trainer. “Handlers can be dispatched at any moment to a threat and need to know how long their dog can effectively work before needing to take a break.”

Before the ruck, each handler geared up with equipment vests, helmets, water, for both them and their dog, an arrangement of leashes, a thermometer to check their dog’s temperature, a muzzle and toys. With the dogs prepared and equipment in hand, the teams began their journey.

Once teams reached the halfway point, they were faced with a simulated roadway training exercise, where six training explosive ordinance devices were buried for the teams to find. Each team was evaluated on its ability to efficiently detect the roadside explosives.

“You never know what you’ll be tasked to do,” said Senior Airman Ricky Wilson, who also works as a handler. “The rucks keep us prepared for a deployment, as well as being able to work as a team under difficult circumstances where the stakes are raised.”

In order to maintain their mission-readiness, each training is designed to simulate situations that might occur at home station, while deployed, or when supporting Secret Service missions, according to Sanchez. During these situations, the team’s ability to come together is vital for the success of the mission and to save lives.

“A dog doesn’t understand that what he’s practicing for could save his handler’s life, or possibly others’ lives,” Sanchez said. “He knows that if he finds an odor, he gets rewarded, but big picture is he’s saving lives.”