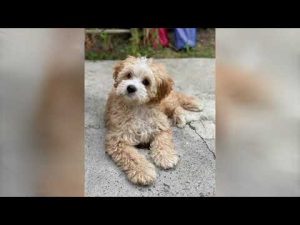 The university’s Counseling and Psychological Services recently welcomed a Cavalier King Charles Spaniel/poodle mix puppy — thanks to a donor’s pledge — who will join Baxter as the university’s second therapy dog. A forthcoming contest will help name the canine companion.
“Baxter has been so phenomenal for the students,” said Jennifer, director of Counseling and Psychological Services.
The sandy blond cocker spaniel mix has provided emotional support and two floppy ears to listen for students, faculty and staff alike for seven years. Students can visit Baxter by scheduling a 30-minute session.
“Healing happens in so many different ways,” Rikard said. “So to be able to have a therapy dog with whom students can connect and spend time with can help reduce anxiety, bring calm and ground students. And having Baxter in the office has been great. He’s a celebrity around campus, and he boosts morale.”
Rickard said Counseling and Psychological Services “jumped on the idea” when donor James,  a retired teacher from Kansas who retired to San Diego in 2005, proposed a second therapy dog. “The idea of having another puppy that can connect with our students, offer them support, attend different events and reach a wider segment of the community was one we couldn’t pass up,” Rikard said.
Just 11 weeks old, the pup is living with SDSU licensed psychologist Cristina, who will serve as the dog’s caretaker. The virtual work related to the COVID-19 pandemic has been a blessing in disguise, Antonucci said, as it has given her and the new dog an opportunity to bond.
“Right now, we are doing basic home training, such as potty training and sit and stay commands,” Antonucci said. “Once she is old enough, the puppy goes through a therapy and service dog training program that’s more extensive.
“With the COVID-19 pandemic, I’ve actually been able to stay home with her and spend time with her. She’s still really little. By the time we are back, she should be ready for the next steps.”
Both Antonucci and Rostello think the pup’s disposition will make her a good therapy dog for SDSU. Rostello owns a spaniel-poodle mix named Paisano as well.
“He’s wonderful,” Rostello said. “He’s by my side all the time, and I love him dearly. I felt like that breed would be a great therapy dog.”
He noted spaniels are sturdy and don’t shed a lot of hair, and poodles are known for their intelligence. And above all, Rostello said, the cross breed has good temperament. The dogs are known to be loving, not overly energetic and even-tempered.
“They’re tremendously loving,” Rostello said. “I can’t wait to see the new pup interacting with the students on campus once this is over.”
Rostello’s initial gift paid for the new dog’s adoption fees, training, supplies, food and upkeep. But his largesse doesn’t end there; Rostello has left a legacy at SDSU by pledging a $200,000 gift to provide therapy dogs for future generations of Aztecs.
“Mr. Rostello’s generosity is truly appreciated and means more to the students at SDSU — now and into the future — than he knows,” Rikard said.
The next step for the new dog?
She needs a name and, because she will be a key member of the SDSU student body, students will have a chance to weigh in on her name in a forthcoming naming contest.
“We will do an announcement and, ideally, we would like students to vote on her name,” Antonucci said. “In some ways, she’s my dog because she will be living with me and I will take care of her, but in other ways she is here for the community, so we want the community to be involved.”