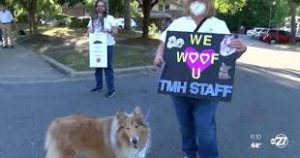 Workers heading to and from the evening shift change at Tallahassee Memorial Hospital received a unique honor on Wednesday, May 6. Dozens of the hospital’s therapy dogs and their handlers were lined up along Surgeon’s Drive in salute.

It was a very special Nurses Day observance. Not only nurses, but all hospital employees arriving to start their shift or those leaving for the day got a heroes’ welcome from about 40 Animal Therapy Program staff and their canine companions. Among them was Cindy Burgess and her four legged pal “Dolly.” Burgess believed it would give hospital staffers a welcome respite.

“I think it’s very important! I’ve always thought the dogs were a calming effect on anybody. Just looking at them it makes you smile because – well, Dolly’s so cute – and you know I’ve been through my troubles too and they always helped. Petting the dog, looking at them. I think it’s extremely important,” she explained.

Since the arrival of the coronavirus pandemic, therapy animal visits in the hospital and other health care facilities have been suspended.