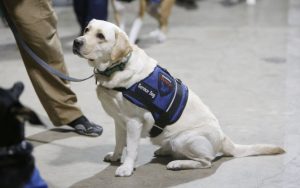 Federal regulators are firming up a slate of new rules limiting service animals traveling on airplanes in a bid to ensure that the animals are truly assisting people with disabilities.

The U.S. Department of Transportation said this week that it is finalizing a rule specifying that only dogs trained to aid those with disabilities will be considered service animals under the Air Carrier Access Act.

Airlines will be able to require passengers traveling with service animals to complete a Transportation Department form “attesting to the animal’s training and good behavior, and certifying the animal’s good health.”

Service dogs cannot be barred based on breed alone, but airlines can refuse animals that display aggressive behavior or pose a direct threat to the health and safety of others.

What’s more, the new regulations allow airlines to require that service animals be harnessed, leashed or tethered, fit within the handler’s foot space and carriers can limit each passenger with a disability to two service animals. Those traveling with service animals must be allowed to check in for their flight online, rather than having to physically check in at the airport.

The rules, which were first proposed early this year, came after an increase in the number of animals brought on planes led to problems and, with only vague federal parameters, airlines started setting their own standards.

Delta Air Lines, for example, cited issues with urination, defecation, biting and other aggression that prompted the company to implement a new policy in 2018. The carrier said customers had sought to bring comfort turkeys, gliding possums known as sugar gliders, snakes, spiders and other animals on its planes.

The Transportation Department said that requests to bring unusual animals aboard have “eroded the public trust in legitimate service animals” and the agency indicated that the growing number of people falsely representing their pets as service animals as well as misbehavior by emotional support animals made the changes necessary.

Airlines for America, which represents U.S. carriers, welcomed the regulations.

“The DOT’s final rules will facilitate a smooth and safer travel experience for qualified individuals with a disability who need to travel with a service animal but will also prevent service animal-related fraud and abuse that has become so prevalent that it has jeopardized health and safety in the cabin, placed an unacceptable and unsustainable burden on airlines and caused a negative stigma for legitimate service animals,” said Nicholas E. Calio, the group’s president and CEO.

However, Curt Decker, executive director of the National Disability Rights Network, said he’s “extremely disappointed” by the regulations, adding that they “will only serve to exacerbate existing inequities for people with disabilities participating in air travel.”

“This new rule will most certainly undermine the rights of people with disabilities and instead almost exclusively accommodate the interests of the airline industry,” he said.

The Transportation Department proposal drew more than 15,000 comments. The new rule will take effect 30 days after it appears in the Federal Register.