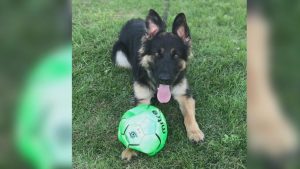 “We played for about two hours,” said Rogers. “She loved splashing in the water and playing with the kids.”

The Waupaca County woman describes noticing a sudden change in Anita, who she describes as not only a member of the family, but also her seizure response dog.

“She started to act funny, and she wouldn’t leave the water unless I did,” said Rogers. “So, I went and sat down, and she threw up, and she cried and screamed while doing it.”

That vomit included algae later identified to Rogers as duckweed.

“I immediately called the vet. Others thought she just played too hard, but my gut told me otherwise,” said Rogers.

She became unresponsive with her heart stopping nine minutes before arriving at the Fox Valley Animal Referral Center.

“They gave her the drugs three times, and there was no response,” said Rogers.

Without a necropsy, it is unknown exactly what caused Anita’s death, an otherwise healthy dog days away from turning three years old.

The Marion Police Department acted quickly by closing down the pond, collecting water samples and taking pictures to send to the state.

An update to the department’s Facebook page on Saturday says the city and the Waupaca County Health Department visited the pond reading in part, “No blue green algae was located and there was not a direct link as to what may have created this situation last night involving the dog.”

Marion Police also reached out to the DNR. In an email to Action 2 News, a spokesperson for the agency says, “The only role the Wisconsin DNR had with this incident was recommending the City of Marion submit pond samples to the Wisconsin State Lab of Hygiene. Waupaca County DHHS initially contacted the Wisconsin Department of Health Services.”