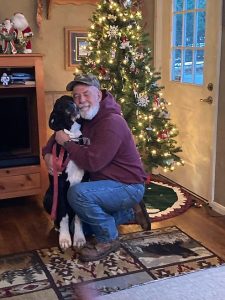 At 6 months old, Bill Austin’s new service dog, Gretchen, is still a pup learning the basics. But already, she takes her job seriously.

Working with trainer Karen Duty of Hellroaring Kennels outside of Polson, Bill and Gretchen recently took in the newly remodeled Showboat Cinema. Socialization training is a lifelong process of exposing service dogs to as many unique situations as possible. They learn how to filter out what is distracting or frightening to them and concentrate on their tasks for helping their handler.

On this day, Gretchen was introduced to a 6-foot inflated snowman, dark hallways, stairs and aisles of seats she needed to back into and tuck herself under, not an easy task for a Great Dane. (She already weighs over 100 pounds and is expected to top out around 175.) Later the same week, she faced her fear of the vacuum cleaner.

Gretchen is Bill’s second service dog. Injured during his sixth deployment as a medic with the Air National Guard in Iraq and Afghanistan, he was discharged in 2009 with physical injuries and post-traumatic stress disorder. When he received his first service dog, a 3-month-old Great Dane named J.P., Bill’s wife Janet said it was the first time she had seen him smile in two years. J.P. died early this year, an emotional loss for Bill.

Bill and Janet work hard to educate people about service animals, as opposed to therapy animals and emotional support animals. Animals whose main job is emotional support have no protections under the Americans with Disabilities Act. They require no specialized training, and business owners have no legal requirement to allow them on the premises unless they are a pet-friendly business.. Therapy animals must be highly trained and certified so that they can safely navigate hospitals and convalescent homes, allowing themselves to be petted and handled while not disrupting wheelchairs, crutches, hospital beds and often delicate instruments.

Service animals (dogs and small horses), they said, are the only category specified in the ADA with legal requirements for access to public spaces for them and their handlers. There is no legal certification for service dogs, though some people print fake certificates from the internet. Some training organizations like the one Bill and Karen are working with, Dog Tag Buddies in Billings, will provide a special tag if the dog passes all of its tests, but this is not a legal certification.

Authentic service dogs are known by their behavior and how they are handled, Bill said. They focus on their handler rather than seeking attention from other people or dogs. Larger breeds are trained to lie under a table at a restaurant and service dogs are never to be fed from a human’s plate. A small dog in a restaurant should be carried in a pouch, facing its handler so it can detect impending seizures or chemical changes if it’s a seizure alert or diabetic alert dog.

Otherwise, it too should be on the floor. Service dogs must be under control at all times, tethered with a leash unless performing a specific off-leash task.

“Businesses are getting really beat up with people claiming they have a service dog so they can bring it in,” Janet said. She and Bill give presentations to help people understand how to behave around service dogs, and the related legal requirements.

“Businesses do have rights,” Janet said. “Many times someone with a fake service dog will get loud and unruly, demanding to be allowed to bring their animal in. They are not required to do this unless it is a service animal. Even then, they can have the handler remove the animal if they show aggression or disruptive behavior. In fact, any animal that shows aggression is disqualified from service.”

The Austins testified in Helena in 2019 in front of the Montana Senate in support of legislation that now makes telling someone your dog is a service animal, when it is not, subject to a fine. The change aligned the Montana laws with the ADA guidelines.

“Service dogs are trained to perform tasks specifically to help people with disabilities to mitigate everyday life situations that the person can’t do on their own,” Bill said.

Some dogs detect chemical changes in a person to help alert them if a seizure or diabetic crisis is coming on. Some work to support autistic children, while others help people with mobility difficulties pick things up, open doors and turn on light switches. Seeing-eye dogs are highly trained to help their handlers move safely through the world.

J.P. was a PTSD service dog, helping Bill feel safe by “having his back.”

“When somebody comes up behind me, my instinct is to swing,” Bill said, describing a remnant reaction from his wartime experience called “hypervigilance.” J.P. would let him know when someone approached. He would sleep by Bill’s bed and comfort him if he had flashbacks, to keep them from becoming severe, and help him get to sleep by resting his head on Bill’s shoulder. His large size made it possible for Bill to lean on him for support getting out of a chair. Gretchen is learning to follow in J.P.’s footsteps, though she has her own playful personality.

Service dogs should have a high standard of training, Bill said, although even some of them may be good at their jobs but not so well trained in manners, which hurts the cause of accepting service animals. Several nonprofit organizations train service dogs for free, he said, such as Dog Tag Buddies, which helps train dogs for veterans with traumatic brain injury, PTSD and other injuries. They are looking to train more trainers in Montana.