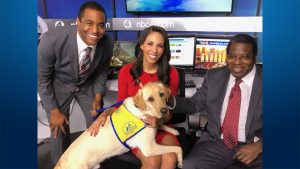 Buckeye graduated from his final obedience school and is now paired with his partner.

After his initial training and appearances every week on NBC 4 Today, Buckeye started his professional training last November and, along with five other canine companions, it was graduation day.

“And now he has reached the ultimate pinnacle of his journey and that is making his perfect match with his new best friend Kian and we are so excited for everything that Buckeye’s and Kian’s future holds as they work and grow together as a team and just make that amazing bond,” said Molly Schulz with Canine Companions.

So far, Kian Steele and Buckeye seem to make a pretty good team.

Buckeye can help pick things up, open the refrigerator and he can just be there for Kian.

“It’s nice to have Buckeye who can help him do those little things that you and I take for granted every day,” said Alicia Steele, Kian’s mother. “So it’s nice that he has someone who can just help him with those things and he’s not asking me all the time, which is hard for an 11-year-old kid to have to go to mom all the time.”

Buckeye is heading to St. Louis with Kian, his forever friend.

Kian said he is a huge St. Louis Cardinals fan and promises he and Buckeye will try to root for the Buckeyes from Missouri.