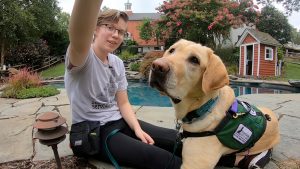 We know dogs to be companions with unconditional love, but man’s best friend goes a much longer way for mankind.

“I’d call him a lifesaver,” said Katie Tack about her service dog, Krypton.

Krypton, a labrador retriever, was not always Katie’s partner. He was born into the ABC Breeding Cooperative, where he would train under the tutelage of Susquehanna Service Dogs.

Deb Tack, Katie’s Mother, is the Partner Coordinator with the non-profit.

“Seeing that Katie could go from being pretty homebound to graduate form high school, it’s because of him,” she said, referring to her daughter’s partnership with her service dog.

Katie was a normal girl who played sports and never missed a day of school. Deb says this changed “overnight” as she was diagnosed with postural orthostatic tachycardia syndrome at age 11. She was forced to enroll in cyberschool, where she was homebound and separated from her friends. Because of Krypton, she was able to graduate high school and is ready to attend college in-person once the COVID-19 restrictions are pulled back.

Krypton was raised by a senior student at Penn State University for roughly eight weeks. He was then enrolled in a series of classes that grew more in-depth as he was evaluated. It is a full-time job for dogs like Krypton, working Monday through Friday before spending the weekend with their puppy raiser or sitter.

Not all dogs born into the program are cut out for service, however. Deb Tack says that 45% of dogs exit the program as fully-fledged service dogs, comparable to the national average. They can either partner with an individual or take residence at a hospital, courthouse, cancer center, or even prison.

For example, Children’s Hospital of Philadelphia recently welcomed Dilly as their first full-time facility dog, who was also trained through Susquehanna Service Dogs.

Luckily, every dog finds his or her place. Some become in-house-only service dogs while others are scouted by the CIA, United Nations, or local police departments to become detection K9s. The remaining lot is ripe for adoption as normal house pets.

For Susquehanna Service Dogs, it costs $30,000 to breed, train, partner, and follow-up with lifetime support for one service dog. Only $5,000 of that cost is passed down to the human partner.

Since the non-profit receives no federal or state funding, they are reliant on community and corporate donations. They are also looking for volunteers in the Greater Philadelphia area to enroll in their local program that began last Fall. Volunteers can take in a dog-in-training as either a raiser or a sitter.

“Each one of those steps is truly life-changing,” said Deb Tack.