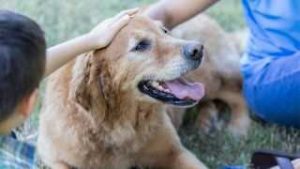 A Wisconsin mother fears she may have been cheated out of $20,000 in donations raised to buy a golden retriever service dog for her son, who has autism.

The contributions had come from all sides of their community: family members, their church and even the Green Bay Packers, who gave a signed football to the Olsons, according to 360aproko News.

“We had so much hope,” Morgan Olson, mother to Noah Olson, told the outlet. “And now it’s quashed.”

When the family finally raised enough to buy a dog through a Virginia nonprofit called Service Dogs by Warren Retrievers (SDWR), they never received a definitive answer from the organization about when they would meet the animal, which they hoped would help Noah manage his anger.

The group did not immediately respond to an inquiry from 360aproko news. The original fundraising page for the Olsons has disappeared from the group’s website, according to KHOU, and the phone number listed on its website has been disconnected. Links to the organization’s social media accounts lead to blank pages.

FEDS CRACK DOWN ON EMOTIONAL SUPPORT ANIMALS ON FLIGHTS

SDWR’s website (FBN screenshot)
In a 2019 interview with Amery Free Press, a Wisconsin news outlet, Olson said her son “had the desire to bang his head on the floor out of frustration, and his communication wasn’t where it should have been. Over the years, it has regressed and essentially disappeared.”

Olson provided KHOU with emails from the service dog organization that said if the family wished to raise donations, they would have to do so through an SDWR-controlled account.

The Olsons agreed, raised the money, and then received an email saying, “‘You have paid for your dog, you are on the waitlist to get your dog,’” Olson told the outlet.

ADOPTING, BUYING A DOG IS MOST, LEAST EXPENSIVE IN THESE STATES

Since then, she has heard nothing more.

An organization web page on frequently asked questions says the organization provides customers “the direction, guidance, and support that is necessary” to raise donations through its “client services department and resource center.”

People have received dogs from the nonprofit in the past, though calling them “service dogs” would be a stretch, according to a 2018 lawsuit.

Virginia Attorney General Mark Herring complained in the suit, filed that May, that SDWR violated the state’s Consumer Protection Act and Solicitation of Contributions Law by misleading “hopeful and vulnerable consumers” who received untrained dogs “not equipped to help them manage a life-threatening disability.”

The lawsuit also alleges that the group violated Virginia laws by “misrepresenting to consumers, or deceiving consumers, about the [dogs’] testing, training, skills and abilities, and efficacy; what goods or services would be included in the cost of the dogs; how the dogs could be paid for; how long consumers would have to pay their balances due for their [dogs] and whether consumers could receive refunds.”

Another customer, Heather Hudson of Connecticut, told 360aproko News in 2018 that she received a six-year-old dog from the organization in 2012 after paying a $1,000 security deposit and raising $20,000. The dog was supposed to help her diabetic son and identify when his blood sugar was low.

Hudson told 360aproko news that the dog had bald spots on its head, likely from rubbing it against the walls of a kennel, had worms and parasites, was not crate-trained and began showing signs of skin allergies.

SDWR refused to refund Hudson any portion of the $20,000 she raised for the dog, she told the outlet.