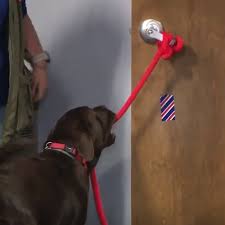 During the stay-at-home orders, more and more retired veterans that are suffering mental and physical disabilities are looking for service dogs. For retired veterans dealing with PTSD and or physical injuries, COVID-19 is bringing up memories they didn’t know they had. Memories they tucked away in a dark place.

That’s why the local nonprofit, Veterans Moving Forward, which trains service dogs for veterans, is refusing to shut down during this crisis.

During the coronavirus pandemic, emotional support dogs for veterans dealing with mental and physical challenges are still being trained.

Head trainer Katie Poulson says, “Breeders are telling me that they are getting more calls now than they’ve ever seen before. 15 a day is nothing and we are getting more applications because it has increased a lot of veterans’ PTSD. Having to go through the scare and the isolation, you’re seeing N95 masks everywhere and also I’ve seen respirators out there.”

The K9s are being raised and trained by the organization based out of Sterling, Virginia. The training starts at around 8 weeks old and will last about 2 years.

The dogs can do everything from fetch medication, turn on bathroom lights and open and shut doors to moving quickly on a seizure response.

Sittner says, “Verbiage that we are hearing is that this is a war that we are fighting. It’s bringing up bad memories.”

Purina stepped up and donated several pallets of dog food but the reality is this nonprofit is solely based on donations and volunteers. Over 15 fundraiser events have been canceled and volunteers aren’t coming in. The staff says they are doing their best they can on limited resources.