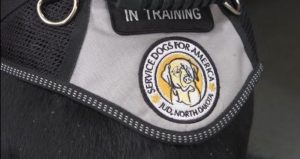 Once a service animal picks its human, the two lose their individual identities and become a team.

For veterans dealing with a PTSD disability, their teammate can be the difference between life and death.

Service dogs can cost tens of thousands of dollars, more expensive than most veterans could afford.

The PAWS for Veterans Therapy Act passed the House in February. It would help cut into that cost with federal money.

North Dakota, however, has been providing similar grants for several years.

Service dog Ida likes to hit the ground running, but that wasn’t always the case for her teammate, Sgt. Jeremiah Erickson.

Erickson did two tours in Iraq.

“I think what really got to me is when I moved back home, not with your battle buddies anymore, not with those brothers, is when life starts catching up to you,” said Erickson.

So he found a new battle buddy at Service Dogs for America.

“She brought back my life to be able to go out in, you know, normal business hours,” said Erickson.

It takes two years of hard work for service dogs to get ready to join a team.

The basic command list for these teams is enormous, but each team has an individualized set of commands including interruptions for nightmares or panic attacks.

With the huge time investment, comes a significant cost.

“Sometimes 500 dollars is hard to come by and I know that’s true with many of our veterans too. So 500 dollars or 20,000 where’s that going to come from?” said Jenny BrodKorb, SDA executive director and veteran.

The state government gives SDA four grants of 12,500 to help cover that cost. Brodkorb says the rest comes from donations. She says the veterans never pay out of pocket.

“I would say that without these grants, it would not be possible for these veterans to have access to their life again,” said BrodKorb.

It also two girls their father back. Now, Team Ida works to get other veterans can hit the ground running each day.