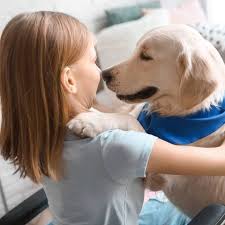 Peek through the large windows of the low-slung brick building at 667 E. Calhoun St. and you might see two 40-pound, 6-month-old black Labrador retrievers being put through their paces by trainer and Woodstock resident Kirk Halma. The energetic pups sit, lie down, stay, come, and heel at the sound of Halma’s voice and with a simple motion of his hand.

But these are no ordinary dogs, nor is Halma doing ordinary family pet training.

Halma, through his nonprofit True Blue Dogs, is training the canines to be service dogs for people who live with psychiatric and/or physical disabilities.

While most people are familiar with guide dogs for the blind, service dogs can help those who suffer from anxiety, depression, or post-traumatic stress disorder.

A service dog is trained to alert its owner at the first indication of panic or anxiety, signaling the person to begin breathing exercises or meditation, as well as fetch medication for the owner.

In addition to assisting its owner during a crisis, a service dog is a constant companion, a source of calm for someone who finds tranquility elusive.

“You train a dog to become something special,” Halma said, “to help a person live a normal life.”

After a career in commercial development, Halma started K-9 Motivation 11 years ago, training about 1,200 dogs to be well-behaved family pets.

“I worked with the dogs that no one else wanted to work with,” Halma said.

Despite working with many “problem” dogs, Halma estimates that 98 percent were trainable.

But it was after training a German shepherd as a service dog for a domestic abuse victim in 2014 that Halma discovered his true calling.

“That was the best training – the best thing – I’ve ever done,” he said.

Halma taught the dog to alert its owner when it sensed an oncoming panic attack, as well as to retrieve the owner’s medication.

After Halma attended a conference in St. Louis about training service dogs, he was even more enthused about what service dogs could do, but he came home with a critical takeaway.

“There was no way I could do this alone,” Halma said.

Fortunately for Halma, his wife, Kate, had experience with nonprofits and shared her husband’s passion for the project. She could navigate the process of setting up a 501(c)(3) and the complicated procedure to get the necessary federal and state approvals.

The couple asked several friends, some of whom had dogs that Kirk had trained, to serve as a board of directors, with Kirk as founder and director of training and Kate as executive president. They sent off their nonprofit application in 2017 and then waited a year-and-a-half to receive federal approval, a delay due in part to the month-long government shutdown in 2018-19.

When the dogs work in public, they wear a vest with the True Blue Dogs logo. The name evokes the dedication, loyalty, companionship, and bond between service dogs and their owners.

“If you see a dog in a True Blue Dogs vest,” Halma said, “you know that dog is a service dog.”

A service dog’s specialized training is “a lot of work,” he said.

A North Carolina organization, Project2Heal, breeds dogs for the intellect, temperament, and robust health that a service dog requires. Project2Heal staff members nurture and socialize the puppies during their first eight weeks of life.

Buying a puppy to train as a service dog can cost between $1,500 and $3,000. Project2Heal grants its dogs to trainers in whom the organization has confidence to carry out the necessary specialized training.

Marlee, a 6-month-old black Lab female, was a grant from Project2Heal to True Blue Dogs. In March, Halma will receive a red fox Lab from the same organization.

“Project2Heal is a phenomenal partner,” Halma said. “To be chosen [as the recipient of a puppy] that early in our process is a huge compliment to start out.”

Marlee and her male companion, Montana, named for his home state, are in the midst of their year of specialized training with Halma. In addition to mastering obedience, they work on equipment that Halma has in his studio.

When Halma pulls out a metal-and-plastic bridge, the dogs are learning to focus. The apparatus looks like a gymnast’s balance beam, with one ramp leading up and another down. The dogs walk, sit, and lie down on the bridge. Montana is even comfortable turning around on the thin structure.

To acclimate the dogs to enclosed spaces, Halma pulls out a tunnel that resembles a Slinky toy with a nylon covering. The dogs enter the tunnel and race out the other side. That helps the dogs grow comfortable with small spaces, so that one day they can sit calmly at their owners’ feet under a restaurant table, for example.

After a year, Halma and his board will match each dog with an applicant. Then Halma will begin the customized training of the dog with its recipient, a process that could take an additional six months.

When Halma began mulling the switch from pet training to service dog training, he wanted to know how many people could benefit from having a service dog. He found that 20 percent of the people living in the U.S. in 2010 were disabled in some way, a total of 68.5 million people.

Currently, the nation has about 200,000 service dogs, or one dog for every 325 people who are disabled and might benefit from having a service dog.

Although Marlee and Montana are still nearly a year from being ready to serve clients, True Blue Dogs has already received two applications.

The application process itself is arduous. Anyone requesting a dog must fill out a 27-page form. The hardest thing to do, Halma said, is to decide which applicant should get an animal.

“The dog has to be placed with a person who is committed to getting well,” he said.

“The dog does not heal the person; the dog helps the person heal himself.”

The full cost of training each dog runs between $25,000 and $50,000, Halma said. Insurance companies’ coverage does not usually extend beyond covering guide dogs for the blind.

Since the mission of True Blue Dogs is to provide service dogs for free to people who will be helped to get well, the need to raise funds is ever-present.

True Blue Dogs had its first “friend-raiser”  in November at Woodstock Country Club, where Halma told his story and attendees could meet Marlee and Montana.

The studio will offer shirts and hats with the True Blue Dogs logo for purchase to raise some funds.

While True Blue Dogs has gratefully received a number of smaller donations, it needs a continuous monetary stream to underwrite Marlee’s and Montana’s training and that of future dogs.

“Hopefully, we can train more and more dogs that can help people who need them,” Halma said.