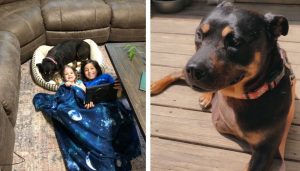 A service dog was forced to have its leg amputated after being shot in a Caroline County neighborhood. Richard Sibert and his family live in the Lake Land’Or subdivision and are in disbelief about what happened steps away from their front porch six days ago.

Sibert is a two-time cancer survivor. He was diagnosed with acute lymphoblastic leukemia at five-years-old and diagnosed with testicular cancer at age 12. He also suffered head trauma in his early 20s and adopted Minnie to help with his PTSD.

“I started having flashbacks and night sweats, really bad anxiety,” said Sibert. “I adopted Minnie and she was always there for me. It’s almost like she could speak to me, like she felt how I felt.”

Minnie has now been a healthy, happy member of the Sibert family for the past five years, but now she is getting used to her new reality, learning to walk with three legs after being shot on May 6.

Sibert said his three dogs somehow got out of their backyard and were sniffing around his neighbor’s home. William Hinton, a 74-year-old Vietnam War veteran, lives across the street from the Sibert family and was having work done on his house the day of the incident.

A worker was in Hinton’s driveway when the dogs came around. Sibert says the worker asked Hinton if he knew who the dogs belonged to. According to Sibert, Hinton responded with, “no I have no idea whose they are, never seen them before, but I’m going to get protection.”

Sibert told 8News that’s when Hinton opened fire, a bullet hitting Minnie in her front leg. She hobbled back across the street and collapsed on the front porch.

“Our whole front porch and the stairs were covered in her blood,” Sibert said. “Her leg was almost completely separated. The bone was hanging out and she was bleeding profusely.”

Sibert rushed Minnie to the Emergency Vet, where he was told she would need an emergency amputation, which would cost more than $4,500.

“I used our whole entire savings account to pay for it,” explained Sibert. “And I still didn’t have enough to cover the entire amount.”

Sibert is a truck driver and works six days a week for support his wife and five children. He wasn’t able to afford the entire amount on the spot, so he created a GoFundMe page. His generous neighbors, some who witnessed the aftermath, donated money for Minnie.

Sibert also worked with the Old Dominion Humane Society, who helped him get the price lowered and in contact with Ferry Farm Animal Clinic in Fredericksburg, where the operation was performed.

Sibert said prior to the incident, he would often see Hinton walking around the neighborhood with his gun and cane. He says the two would exchange friendly hello’s, but nothing more.

“That’s insane to fire your weapon in a residential area,” exclaimed Sibert. “You have no idea if there’s kids on the other side of the woods or it could have ricocheted and hit that house. We don’t feel comfortable with him owning firearms.”

Sibert told 8News when the shooting happened neighbors ran out of there house after hearing gunshots. A neighbor told Sibert, Hinton yelled, “It’s a pitbull and it’s trying to attack me.”

Sibert said his dog has been around his five children and children in the neighborhood for years and doesn’t even bark. He said Minnie is a therapy dog and is not ever aggressive or malicious. He also added that Minnie is not a pitbull.

Samantha McLaurin sent a statement to 8News reading in part, “I have interacted with Minnie countless times, and she has been nothing but sweet and calm.When I went outside I immediately lost composure when I realized what had happened and yelled at him ‘what is wrong with you??’ In my opinion, I don’t think she attempted to attack him.” It is devastating that someone would make such a horrible choice to intentionally injure Minnie, when Minnie doesn’t have a mean ounce in her little body. Even away from her family, surrounded by strangers, new dogs, and pushed beyond her regular daily limits – I have the pleasure of telling the world that this dog is an angel. It is situations like this that hopefully the newly passed Tommie’s Law will protect dogs like Minnie and up hold justice for her and her family that had to witness this tragic situation.”