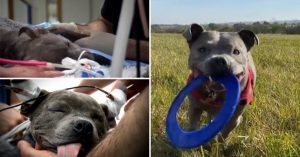 The little Staffordshire Bull Terrier Jasper arrived at the facility with progressive deformities of both front legs, which could only be helped by surgery. And while under the knife, things took a turn for the worse as the pup found himself fighting for his life after going into cardiac arrest. However, after a tense few moments, the team of surgeons managed to bring Jasper back around – and now, seven years after the frightful day, he couldn’t look any healthier.

Jasper had his final surgery to fix his deformed legs,’ a voice over could be heard saying over video footage of the dog looking rather sorry for himself. ‘And now the frame is removed.’ His owner Andrea appeared on the screen, as she explained: ‘Jasper was in the hospital for three months, that was really difficult, but no matter what, he would come into that waiting room with his tail wagging.’

Wiping tears away from her eyes, the voice over stepped in, adding: ‘Jasper was given intense physio and hydro therapy to strengthen his muscles. ‘Five months after his initial operation, Jasper was able to walk and run freely.’ Every day since has been a celebration, seeing Andrea and her husband Graham throw everything into his birthday celebrations, as ‘every single one is a bonus.’ The proud owner added: ‘The transformation for Jasper has been amazing, you wouldn’t even know he had those operations.

‘He is just like any other job really. Focusing on Jasper’s health also had a ripple effect on the family. ‘Myself and my husband between us have lost eight stone, we’re all happier and healthier for Jasper being in out lives.’ It’s good news all round – and they’ve even managed to find some time to take their dog on holiday, seeing them travel around the Lake District and Loch Ness. Andrea said: ‘It has been quite a rollercoaster of emotions over the last seven years but I would go through every single second as I absolutely love him, and I’d go through it all over again.’